Oh, What a Difference a Writer Makes AKA The Immense Disappointment of "Moon Knight" #13 & #14

From Hopeful to Saddened 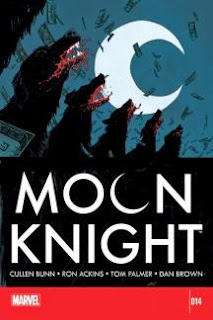 Cullen Bunn is an interesting writer. He has created stuff I've greatly enjoyed, such as his earlier issues on the current run of "Magneto", and he has made work that I found to be utter tripe--see "Fearless Defenders". Therefore, when it was announced he would writing "Moon Knight" for six issues, following up the amazing Warren Ellis run, and solid Brian Wood submission, I was hopeful that I'd get to read the good Bunn, not the terrible one. After having read issues thirteen and fourteen my hope has turned into a deep sadness, because this is just awful. 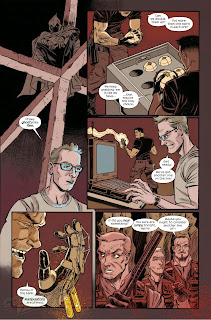 With these first two issues of Bunn's Moon Knight it appears he is going for what Ellis did, with each issue being its own little story. That is a mistake, however, because it makes the quality-gap between what Bunn and Ellis have created all the more apparent. Bunn's 13th issue where Moon Knight helps free some ghosts is somewhat-passable in terms of plot (mercenaries trap ghosts to sell to people who collect weird-stuff), but the way he writes our hero's way of talking makes him come-off more like a Batman knock-off than the deranged avatar of Khonsu we know and love. Marc Spector just seems "off" the way Bunn writes him, unsure whether he wants to be brutal and tough or make little jokes. This gets even worse in issue #14 which other than a fun reference to Moon Knight's first appearance fighting "Werewolf by Night"  is miserable. We get a story where he discovers a man who owns a junkyard has been training dogs to attack and kill rich people. Yes, really.
The most depressing thing about this is the previous twelve issues of "Moon Knight" prove he can be written well, and Bunn even shows hints of quality, such as in the clever way the opening of each issue shows brief flashes of images that will be important throughout the story. It is so incredibly discouraging to think we are stuck with four more issues of this, and unless Bunn somehow turns thing around rapidly this is going to be amongst the worst Moon Knight-stuff I've seen--and that's coming form someone who remembers when Moon Knight fought Mexican Lucha Wrestlers. At least the covers by Declan Shalvey are still incredible to look at, and hint at a good story we can imagine in our heads.
1 out of 5 stars (for both issues #13 and #14).
Posted by David Charles Bitterbaum at 9:46 PM