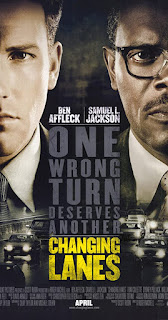 Roger Michell, best known for directing, "Notting Hill," created one of my favorite movies of all time, "Changing Lanes." Back in 2002 this movie about how a simple car accident can lead to all kinds of mayhem really astounded me. Featuring a young Ben Affleck and younger Samuel L. Jackson, it focused on a lawyer (Affleck) who gets in a fender bender with a man who used to get in all kinds of trouble who is trying to turn his life around (Jackson). The thing is, Affleck's lawyer has a lot of problematic history too and he and Jackson engage in a battle of wits in this movie that is about two men but also a metaphor for race and class. William Hurt has a small role in the film too as Jackson's AA sponsor and he's always a treat in whatever flick he pops up in.

I randomly thought of, "Changing Lanes," the other day when I was thinking about underrated movies. I Googled Roger Michell and discovered he actually died in September of this year. He has one more movie he directed, "The Duke," and it is due for release in 2022. Michel made great movies ("Enduring Love," is another good one that's really weird)and it is a bummer he's gone. I would recommend, "Changing Lanes," to anyone with a hankering for a good thriller that also offers some sharp commentary.