This Way of Collecting All the New, "X-Men," Comics is Pretty Clever 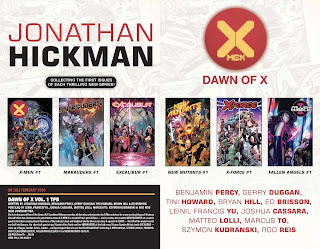 Since re-launching the X-Men with Jonathan Hickman's, "House of X/Powers of X," mini-series and now him writing some of the titles and basically overseeing the rest as guiding-force of sorts with an assortment of books coming out, I was curious how Marvel would collect them. There tends to be a title every week (sometimes two) and each issue has a guide in the back discussing the proper order to read the comics as they are all so tightly linked. I guess with this in mind Marvel is going to (at least initially) release trade paperbacks for these first six issues of all the series or so that collects the assortment of books in the order they were released (within some big volumes). That means you'll be able to get a book and it'll be set-up so you already know that,"Marauders #1," is before, "Excalibur #1, but, "Excalibur #2," comes before, "Marauders  #2," because the trades will reflect that in their assorted volumes.

It would not surprise me if all the series get individually collected as well eventually or as the books proceed and potentially are less closely-linked this, "All-in-one," trade volumes will cease. For now though this is a pretty clever method of having readers follow-along to the mega-story Hickman and everyone else are making.
Posted by David Charles Bitterbaum at 6:42 PM