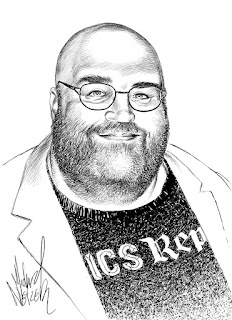 For years I have loved reading Tom Spurgeon's website, The Comics Reporter. The man was a huge name in comic-related journalism, having been the editor of The Comics Journal for five years in the 1990's and doing The Comics Reporter for over 15 years. He had been health problems these past years and I just recently learned he has passed. Sometimes with the comic-books coming out that week he would put-up a post of the stuff that looked interesting...and now we won't have him to tell us about any future weeks or share his thoughts on comic conventions, note the birthdays of comic creators, or the like.

Sometimes Tom would have a fun theme for the weekend where he would ask people to contribute their thoughts about comics (like, "Name your five favorite close copies of Batman."), and I would sometimes email my thoughts for a segment if I had an opinion. He also would at times request people send him links to retrospectives written about shows or famous comic-creators who had passed and I'd do that too. Now I'm writing an obituary for Tom himself, and it feels so strange and just wrong to be doing so. There is a big hole left in the comic industry and journalism by Tom's passing, and although I did not know him super-closely I enjoyed our occasional email correspondence and checked his site daily. Goodbye, Tom, you will be missed.
Posted by David Charles Bitterbaum at 11:01 AM