"Letters from Midia," is a Stellar Read! 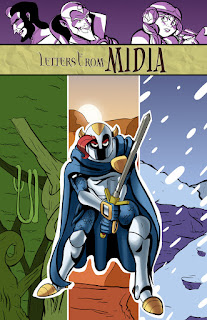 I was on Reddit looking at the comic-related posts as I enjoy doing and indie comic-creator Boluwatife Oriowo was discussing a new comic he'd published, "Letters from Midia." Available on Amazon as a paperback or for reading on a Kindle, it follows the story of a mysterious knight trying to track-down his love, a young princess named Midia who has been kidnapped by some cruel folk who plan to use a mysterious black ichor on her to create a weapon (they want to take over the Kingdom, as villains tend to desire). A theme emerges as the knight keeps fighting new challenges in the hopes of getting closer, only to find yet another letter...and another letter...just letter after letter. There is a really cool part in the book that helps illustrate just how many letters there are and has us wondering if Midia will ever possibly be rescued. I won't spoil the ending, but I found it very satisfying and bittersweet.

Oriowo's artwork is fantastic, with it masterfully illustrating the range of fights the knight faces. Whether he's combating ogres, dueling mid-air with half-human half-bird alchemists, or jumping-around a stone giant in the hopes of finding a weak-spot, it all is kinetic and gorgeous. Between the great story and how wonderful the books looks I really enjoyed, "Letters from Midia," and appreciate that Oriowo was willing to send me a free digital copy for the purposes of review when I messaged him about my interest in the book. I rate it a stellar 5 out of 5 stars. You can buy a copy of, "Letters from Midia," for yourself on Amazon, and you can also see more of Oriowo's stuff by visiting his Tumblr page or dropping-by his Twitter.
Posted by David Charles Bitterbaum at 6:37 PM