The First Two Issues of "Mech Cadet Yu," Are A Treat to Read 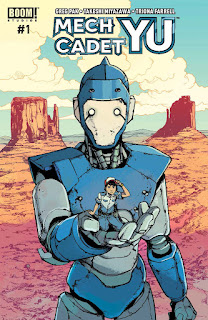 I'm a fan of Greg Pak, he is a solid writer whom did a number of Marvel titles I quite enjoyed. I had not read much of his work outside of Marvel, but he and artist and oft-collaborator Takeshi Miyazawa has a new book from BOOM! titled, "Mech Cadet Yu," which has been getting so much buzz and selling well enough that it went from being a mini-series to now officially an ongoing title. In a time when many books seem to be announced as ongoing and end-up as little more than minis, it is great to see something go the other way, where the ideas of the creators strike such a nerve they are encouraged to keep going with their creation! Having now read the first two of the issues of, "Mech Cadet Yu," that have come out, I can see why people love it.

The general idea we see established in the first issue is that many years ago mechs started coming to Earth, finding humans they liked, and, "Bonded," with them in the sense they would only let those humans assist in piloting them. Decades later this process has continued to assist in the fighting of otherworldly aliens that the mechs seem to dislike as much as humans. There is a school set-up to assist promising youngsters in bonding and working with mechs. Standford Yu is not one of those students. He is a janitor with his mother and works at the school where some of the students are quite unpleasant towards him. Therefore, when a robot lands off-course and decides it wants to bond with Yu. It's an effective first issue in that is clearly lays-out the world, the characters, and makes it evident much fun is on the way. 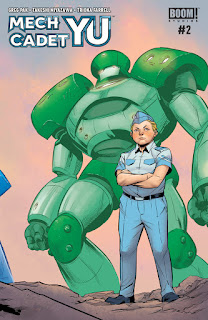 After the first issue we follow the cadets in issue #2 as they train--and a mean cadet whose Father is also a general and whom has a human-made mech available for her usage. It is a fun read as well and at the end makes it clear that space-alien threat from long ago may be imminently returning. The issues read briskly and very entertaining, with Miyazawa's artwork doing a stellar job giving the mechs a look that is familiar yet also pleasantly otherworldly. The mechs are drawn with a fantastic fluidity when they move and the art is a stellar meshing of a somewhat manga-esque look with a Western-style as well. As I mentioned, two issues have come out of what was going to be a mini-series with four issues but which is going to be expanded, so it is still the perfect time to jump-on the book and start reading!

Also of interest, is that, "Mech Cadet Yu," will have the trade paperback collecting its first four issues released to comic-shops in January of 2018 but bookstores will have to wait until May to get copies to sell--with BOOM! saying this is a way to show appreciation to comic shops for helping make MCY a big enough hit it is now an ongoing series and such. An intriguing gesture of kindness to retailers for sure! Should you not want to wait for the trade however, as I mentioned only two issues are currently out and I would encourage you to give this book a read as I rate it a stupendous 5 out of 5 stars for each of the first two issues. You can currently buy and pre-order issues of, "Mech Cadet Yu," at Things From Another World, from MyComicShop, or via eBay.
Posted by David Charles Bitterbaum at 10:44 PM