That Minecraft Sure is Popular, Eh? 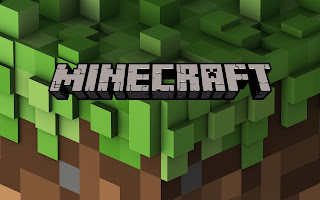 Okay, so, "Minecraft." The worldwide phenomenon beloved by countless adults and children has many official things that tie-in with it from books to toys, and so forth. Apparently there is a bit of a cottage industry of people making stuff using, "Minecraft," as a springboard for their storytelling as well. Whether they are one of those Youtube streamers who kids love and they use their love of the game and the fame brought about by it to make a comic or it is a book that uses actual screenshots from, "Minecraft," people love to utilize the popularity of, "Minecraft," to create things whilst also very, very, carefully emphasizing their stories are in no way licensed by or affiliated with the brand. This is cool and I wanted to review some comics that were vaguely-related-yet-legally-distinct-enough-to-avoid-getting-sued with, "Minecraft," but encountered one big problem. You see, I know basically nothing about the game having never played it.

I love video-games, but haven't been as able to play them since the birth of my son, Clarkson, with his needs taking priority over entertainment. He often needs assistance as he is a baby and therefore can't feed, bathe, or wipe himself yet. This results in my wife and I finding our recreational time impacted a bit and therefore a need arises to decide what things are priorities when our time is free. Blogging, watching entertainment, and reading comics has usually come first so I've been playing games a lot less. "Minecraft," of course has been out for a loooooonnng time but I just never got around to playing it and having the opportunity to do so anytime soon seems unlikely. I know a little about the game, however. I've heard all about, "Redstone," and, "Creepers," so I thought I might as well give two comics I encountered at a book fair a try. I was very, very lost. 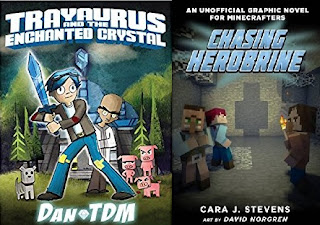 My wife is a teacher and the school bookfair is always a treat. I saw two comics there dealing with, "Minecraft," (in an unofficial context,) and bought one there I was unable to reserve at the library and put the other on hold to get next time I stopped by the book depository. The books were, "Trayaurus and the Enchanted Crystal," and, "Chasing Herobrine."

"Trayaurus and the Enchanted Crystal," is written by the popular Youtube streamer DanTDM who plays, "Minecraft," a lot and will apparently concoct stories with characters such as the ones we see in the comic. Dan apparently has over 10 million followers on Youtube and is a huge deal if you're a fan of streamers (especially to kids). I personally would have be unable to tell him from anyone else up until I read this comic. That said, "Trayaurus," is indeed cute and has some solid artwork that looks Minecraft-esque while also standing on its own. "Chasing Herobrine," was written by Cara J. Stevens actually uses screenshots from, "Minecraft," and little captions. It actually is the continuation of a previous story it seems so that didn't do me any favors in following along with plot. From what I could gather it was basically a way to tell people how being a griefer/negative to other gamers is bad. It was pretty ugly though as screenshots from a a blocky game like, "Minecraft," don't exactly make the best art. 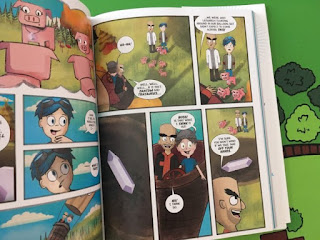 Both of the stories drew from, "Minecraft," in different ways, with DanTDM's story working a lot better in terms of entertaining me than, "Chasing Herobrine," did. I don't think more familiarity with, "Minecraft," would have impacted my enjoyment of the stories, but it is hard to say for sure (maybe I would have gotten more in-jokes). I mean, I didn't know who DanTDM was before his book and I still liked it plenty. Anyways, I won't give the books an exact rating as I don't feel especially qualified to do so. That said, I will state that I'd read more from DanTDM and would pass on comics that use, "Minecraft," screen-shots as, "Chasing Herobrine," did--it was just too fugly for me.

Anyhoo, it seems that, "Minecraft," didn't just make its creator who sold it to Microsoft for 2.5 billion dollars rich, plenty of people smart enough to use it as a tool for streaming or storytelling are benefiting too. I'm not sure if there is a lesson to be learned here or if I just wasted all of our respective time, but maybe, just maybe, I'm inspired enough to try, "Minecraft," sometime during a free moment. Maybe. Probably not. We'll see.
Posted by David Charles Bitterbaum at 11:13 AM