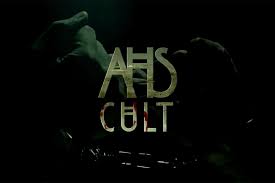 I previously talked about, "American Horror Story," when I had gotten into it with, "Hotel," and began watching older seasons to catch-up. It feels like it has been forever since that most recent season, (what's that? "Roanoke?" I don't recall such a miserable season ever existing) but later tonight the fifth episode will air of what has been an interesting program so far. "Cult," has focused immensely on politics, with the 2016 election serving as a backdrop for much of the season, the fear and anger that election inspired and continues to foster playing a large role. Clowns have also been involved, because if you want to scare a large number of people using clowns generally seems to do the trick.

"Cult," started out a little so-so, honestly. It was unclear how certain characters seemed to know each other and what their motivations were, the amazing Sarah Paulson was playing a shrieking stereotype of liberals and Evan Peters seemed to be up to something, but just looked like an annoying Men's Right's Activist-boosting Trump-lover. Thankfully, around the 3rd episode of the four that have aired so far it started to become apparent that the whole point of Paulson's character was that for all her liberal posturing it didn't take much effort for her to start morphing into the kind of people she claimed to despise and the fourth episode was amazing as a ton of question marks became answered and Evan Peters' character of Kai was revealed to be something much more terrifying than a bland caricature of a Trump supporter (with Peters' stellar acting help sell the role too).
Kai is someone who isn't a Trump fan per-se. He is a man who sees people have fear, and he wants to use that fear. At first it was confusing why Kai was assembling a group of people who seemed to have little in common in regards to their views, but it has grown obvious. He wants people who are afraid. Billy Eichner is always a treat in any show and his character of a gym- rainer tired of being picked-on by his boss for being gay and suffering from bankruptcy is feeling terrified at the thought he is a failure. Kai sees this and uses it to turn Eichner into a murderer. A black female reporter sick of being judged for her race and gender, full of rage and scared she will never advance at her news station becomes a follower of Kai after he removes an obstacle to her advancement (a younger, cuter, and crueler reporter). A Trump-loving Good ol' boy played by Chaz Bono of all people (whom I did not know was actually such a good actor) is horrified that as a white male who, "Loves pussy," and guns will be told he's the problem with a country he no longer thinks is going the right direction until Kai steps-in to help him, and so on and so on in a stellar fourth episode where flashing-back to the election itself puts a lot in perspective with Kai. It is only a matter of time before his little group clearly becomes the cult promised by this season's title.

The main characters were at first presented as being a married lesbian couple named Ivy and Ally (Paulson plays Ally) but with the focus being put on Kai in last week's episode it is clear that none of these people are the protagonist--the main character is fear. Whether we are witnessing how fear can paralyze us, motivate us, or be twisted by others for nefarious means, fear is the driving force of almost every character we have seen this season on, "American Horror Story," and it is a fitting focal point with just how scary the world seems right now. I'm hesitant to assign a rating to, "American Horror Story: Cult," just yet as for all I know the upcoming fifth episode tonight could continue the positive trend of quality or very well suck. I think once the season wraps I'll post an update to this article with some final thoughts, but for now I'll simply say as long as things continue getting more and more interesting this may be quite the stellar season!
Posted by David Charles Bitterbaum at 2:20 PM