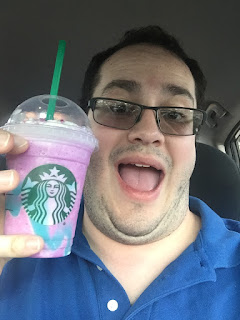 The Unicorn Frappuccino exists and people don't really care what it tastes like because the whole purpose of the drink is to take a picture of yourself holding it and looking like what kids call, "Basic," as in, "Look at that basic bitch with his/her Unicorn Frappuccino." Well, I must be basic because there I am above smiling like a doofus. It is very colorful, with its bright pink and light blue that mixes into a deep purple, but how does the thing actually taste? Well, "Sour birthday cake and shame," actually isn't too far off. If the world is ending (nuclear war seems uncomfortably possible lately) at least we have colorful drinks that taste weird.

Before you mix it the drink just tastes like sugary milk, honestly. The key is to mix it up at which point something interesting happens--it suddenly tastes a lot better. Once mixed into each other the sour blue syrup, pink powder, mango mix, and milk combined with the whipped cream gives everything a taste not too unlike an Orange Julius. It's frothy, sweet, and a bit tart. I wouldn't describe it as anything amazing flavor-wise, however (this is strictly just above-average) but I would still try it again maybe during this brief period of time you can even buy a Unicorn Frappuccino--after April 23rd it theoretically is gone forever or until public demand brings it back. In summary I would rate it as...
Visually/Aesthetically: 5 out of 5 stars.
Taste: 3 out of 5 stars.
Posted by David Charles Bitterbaum at 11:37 PM