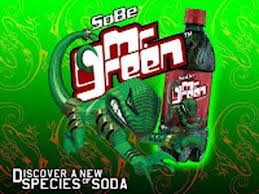 Back in Junior-High I drank a soda that was only around for a short time, basically one Summer. It tasted kind of like Dr. Pepper but advertised how it had Ginseng and was green--like, dark green. If you drank enough and then pooped later it looked like you were expelling toxic waste (sorry if that is TMI). It was advertised in the, "EXTREME!" method that at times gains popularity and actually didn't taste too bad, but lacked anything that made it amazing. It was called, "Mr. Green," so it basically was ripping-off Mr. Pibb, who copied Dr. Pepper. It was a rip-off of a rip-off.

Mr. Green is the only soda to ever be released by Sobe, a sub-company of Pepsi which at various times has made juices, energy drinks, and sold milk. I honestly thought I was the only person in the world who remembered this soda but you can find the occasional Facebook post, forum comment, and other stuff like that with people going, "Remember Mr. Green? I kinda miss it." I too kind of miss Mr. Green and would drink some if I could, perhaps. A new bottle or can hasn't been made since 2003 however, so it would be very, very expired. I don't even know what had me thinking about this soda today, but it popped into my noggin so I decided to share my recollections as an article for Flashback Friday. Anyone else remember Mr. Green and hold fond-ish memories about it?
Posted by David Charles Bitterbaum at 11:41 AM