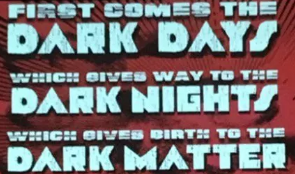 Okay, seriously, what the fuck is going on with DC and Marvel? Right as I start thinking DC is looking peachy-keen compared to, "People don't care about diversity," comments from Marvel (now with additional hidden antisemitic and anti-Christian artwork that to their credit Marvel swiftly addressed), DC goes and announces, "Dark Matter." I know what you might be thinking, "Oh that sounds like a fun space-based event," but it actually is a move toward diversity--like, more characters of color...and it is called, "Dark Matter," which not only sounds vaguely offensive but also is referencing a theoretical matter that doesn't exist (possibly) so what does that even say as well?

Plus, the creators are all men, and about 10 of the 11 of them are Caucasian too, so we may be getting more diversity in regards to the characters we see but the spinners of these yarns will still be predominantly white dudes. Oh, and when someone brought up gender to a panel of DC creators at C2E2 John Romita Jr.  talked about how he wasn't working on, "any transgenders," as of yet in his stories. In regards to the transgender individuals I know and call a friend I'm 100% sure they do not appreciate being referred to as, "Transgenders," in the same way some other friends of mine feel it is derogatory to say something like, "Oh, he/she is a gay."

This would look bad for DC and probably usually get more headlines, but to their luck Marvel is asking comic-shop employees to dress-up like Nazis. Oh, wait, sorry, dress-up like Hyrda members, who are totally different from Nazi's despite for the history of Marvel comics usually being shown as exactly the same as Nazis and being led by a Nazi known as the Red Skull. Seriously though, it is cool guys, these are like a whole separate branch of Hyrda unrelated to the Nazis despite having Nazi-like ideals, oh and Captain America has been a secret member all along because the Allies actually lost World War II but used the cosmic cube to change history into the one we know now, but truthfully the Nazi's won World War II and Cap was a Nazi all along before any secret reality changes and I need to stop now because the stupidity of this is hurting my head.

Obviously, when you ask people to dress-up like, "Not-quite Nazis," to promote your comic such an idea is going to be met with a mixture of disgust, revulsion, and other synonyms for reactions to grossly stupid ideas that you think someone, anyone at Marvel would have realized sounds bad on paper and in practice as well--its a fail all-around. DC just made some questionable moves, but I think Marvel still took the cake for bringing upon itself another batch of bad press for an idea that just makes me do a facepalm, as the kids call it.
Posted by David Charles Bitterbaum at 11:54 AM