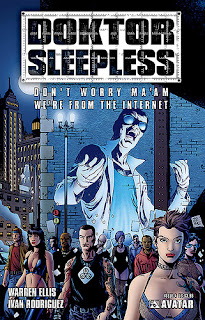 This was a series that was a mixture of Warren Ellis technology rants, a dsytopian future where people disappointed with the era they live in ask, "Where's my fucking jetpack?", and a man who wants to bring chaos to the world. It was great, and then it just stopped. Some folk called it reminiscent of Ellis' famous, "Transmetropolitan," series, but a bit darker. Other people thought it was unique. This article here summarizes everything expertly, including its infamous blending of fact and fiction to make things that extra bit stranger.

It had discussions of extreme body modifications, people made out of pure thought, and fascinating ruminations on where humanity ends and tech begins. Oh, and then the Elder-Gods type stuff enters the picture and shit gets really odd. I thought it was really good and found myself sad when it abruptly ended as some of Ellis' other works have done--be they for Avatar Press (so we shouldn't expect anymore "Anna Mercury" I presume?) or another publisher ("Desolation Jones," for one example of an assortment). 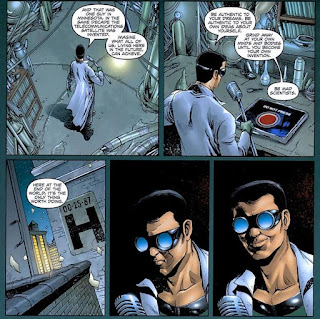 If I'm recalling correctly, the last image in the comic was a bunch of people about to start a riot followed by the image of a hand grenade featuring a smiley-face drawn on it being tossed and hanging in the air, just taunting us to check-out the next issue so we see what happens. That next issue probably will never come and that grenade will remain forever suspended in the air. Ellis has occasionally made claims he will return to the book, but I'm more and more doubtful.

The first eight issues were collected, the remaining #9-#13 can be found without too much trouble in your local dollar bins as the series didn't exactly catch fire. I would recommend you read it, as it is Ellis being his usual interesting self, but with a fun and slightly off-kilter vibe that gives everything a mischievous edge. It's delightful stuff.
Posted by David Charles Bitterbaum at 9:51 PM