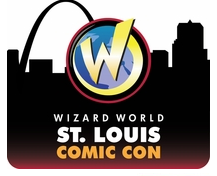 I was at the 1st-ever Wizard World Saint Louis last year and had a wonderful time. The newest Wizard World is approaching fast and I will be there again this year, talking with creators and fans! I will of course also be searching for good comics, so you might find me digging through a long-box if I'm not spotted wandering the floor. This will be the 4th time I've attended a convention and with that in mind I thought I would offer a few tips on how to prepare for a convention and behave at one such as this Wizard World if it is your first time attending, or it has just been awhile since you went to a convention.

Preparation
Making sure you are prepared for a convention is key. A little preparation truly does go a long way. If you are already at the convention center and find you're lacking something you should have packed you can't do much, so make sure you're ready before arriving at the America's Center--or wherever your convention is.
Some key items to pack include:

Cash
More and more these days retailers and even celebrities at conventions will take cards, but quite often cash is still king, with plenty of people preferring--or only accepting--the ever-popular green-stuff. Plus, even if someone takes cards being able to offer cash can sometimes get you a slight discount.

A Tote, Purse, Backpack, or Bag of Some Sort
You need a way to carry all the stuff you're bringing and going to be buying, so make sure you bring some kind of big bag to carry everything.

Deodorant
The convention-floor can get incredibly hot and sweaty, with a resulting stink of body-odors from the men and women around you being more than a little strong. In order to avoid contributing to this potential stink sometimes it is a good idea to bring along deodorant if you're the kind of person who sweats profusely when hot.

A Print-Out of the Convention Map
Conventions usually will supply these, but having your own map you're marked in advance for where you know you want to go can save time

A Print-Out of Events and Panels
Again, most conventions will often have these available, but having your own that you've been able to make notes on already is handy
A Pen or Pencil
Remember how I said you might have already written on your own maps and plans? Well, I would assume you'll want to keep taking notes while at the convention and having a pen or pencil to do so is pretty key for that.

Cameras Are Useful (If Your Phone Doesn't Have One Already)
There will undoubtedly be interesting things you want to photograph, and most of you probably have a phone with a handy camera built-in, but just in case you don't I thought I would mention bringing a camera.

Blank Paper
While some creators will be happy to sign a book, you might run into someone who will sign something for you, but you'll suddenly recall you don't have any of their work on you. Well, that's why it is good to have some blank paper for them to sign in case they are lacking any of said paper on their own person.

A Folder
In order to hold all your print-outs and papers you really should have a folder. It helps keep you organized and stops your papers from getting crumpled up.

A Business-Card Holder
Some folders have this built in, but if they don't it is always good to have a way to store business cards. Whether it is a fancy holder you bought or a zip-loc bag, various creators or celebrities may have cards they give you/you take and having those loose in your pocket or bag is a very easy way to lose stuff.

Breath Mints/Strips
During the day you may be drinking coffee or eating things that make your breath a little offensive. Give those comics creators you're talking to a break and make sure to bring some mints or strips to keep your mouth from stinking.

At The Convention
You've arrived at the convention and are extremely excited, right? Well, even though conventions can have an "anything-goes" sort of feeling between the wild costumes and fun events there still are general rules and etiquette you should follow.
For example:

If You Have a Prop Weapon, Expect it to Be Inspected
In this era of increased fear of terrorist attacks, or general fighting and violence in public places, someone walking around with a huge battleaxe or tricked-out Uzi may look a little threatening to the convention's security, even once you explain its all a prop made out of harmless crafting-materials. Please, don't be upset if security wants to take a closer look at your decorative weapons, its just for safety purposes, and if anything you should be flattered your fake weapon looks so convincing people worry it could be real.
Sneaking-In Outside Food Makes You Look Bad
Look, conventions charge too much for food and drink, that's no secret. Just like at sporting-events or amusement parks refreshments are over-priced and that's just a way of life. You keeping a mini water-bottle or bag of candy in your pocket may not raise eyebrows, but if you're sneaking a full meal into a convention the odds are you will be caught and your stuff will be confiscated. Nobody likes paying the higher-prices for food at conventions, but it is just a way of life. So again, as with the movie theater or anywhere else you might be able sneak-in a small treat, don't be that person who pulls a full pizza out of their backpack as it just makes you look bad.

If You Want a Picture of/Signature from Someone Famous, Be Prepared to Pay
You've waited in line for what feels like forever and now you're finally up at the table of your favorite celebrity. You're excited to take a photo of them and get their signature but suddenly you notice that stuff costs money. Please don't be surprised, because many of these celebrities make a fair amount of their living charging for signatures and photos, so please don't be that person who whines and asks if they can just get a "quick" photo with a celebrity for free. The only time I saw any celebrity come close to allowing this was Henry Winkler (AKA the Fonz) charging for photos with him, but allowing people to take photos of him for free, and that was an exception to how stuff normally goes.

Want to Take a Photo of Someone/Something? Always Get Permission
Besides celebrities who charge for photos (as just mentioned), everyone else is fair game, right? Wrong. Perhaps you see a guy or gal in a really cool cosplay outfit, or you want to text your friend a picture of a rare comic for sale and see if they want you to get it for them, that is all understandable. Still, whatever the case, before you take a picture of someone or something specific (just taking a big photo of the event-floor shouldn't cause a ruckus) make sure you get permission. Just because a man or lady is dressed-up in cosplay that doesn't always mean they want you taking pictures of them, and sometimes retailers could take offense to your photographing their items, assuming you might be a competitor looking to undercut their prices. That sounds crazy until the first time you're accused of such a thing. Basically, just ask and normally people will say taking a photo is fine.

Don't Bring 50 Copies of Something for a Creator to Sign
I get it, you're excited to meet the writer/artist of a comic you love, and for a small fee or even for no price at all they'll be happy to sign that comic you brought with you. What's that, you brought another 49 copies of the exact same comic or other things they've done? Well, now you're turned from a fan into a nuisance. The creator will be all-but-positive you're just getting them to sign stuff for you to sell, and everyone waiting behind you is going to lose their patience by comic number 30 or so. Don't be that guy/girl whom everyone hates.

Be Polite
This should go without saying, but sometimes people forget it:  Manners matter. When you're at the convention you shouldn't shove people out of your way, but instead say a simple, "Excuse me." Should there be a creator who has art you find you less-than like, you should just say something nice like, "Very interesting, but it's not for me," as opposed to, "This sucks, how do you manage to do this for a living?" Being polite is very underrated, and often appreciated.

Now you are hopefully more prepared for the upcoming Wizard World or any other convention you'll be attending in the near future. Should you be going to Wizard World Saint Louis keep an eye out for me, and I'll see you the first weekend in April!
Posted by David Charles Bitterbaum at 2:58 PM