Not Quite A Review As the title says, I have played that new "Metal Gear" game, or if you want to say the full (and lengthy) title, "Metal Gear Solid V: Ground Zeroes". Note that depending on whom is typing the title the "V" might be a "5" if they hate/don't understand roman numerals--which can admittedly get confusing (what Super Bowl are we up to now?), but I'm getting off-track.

I should open with saying this isn't quite a review of the game. I'm not going to break down in extensive detail the controls, gameplay, and plot. I'll discuss those a bit, but nothing too spoilery. Instead, I'm moreso going to just share with you some of my thoughts on the game and the various questions that have been going around about it, from if it is too short and expensive, to certain plot-elements upsetting folk. I will give a final rating though, because I just can't help myself. With that clear, it is time to delve into my thoughts...

"Ground Zeroes" Thoughts
Let's get one major thing everyone is talking and complaining about out of the way:  "Ground Zeroes" is indeed quite an expensive purchase considering its play-length, be you playing it for your newest generation of consoles (PS4, Xbox One) or enjoying it on what is now the older generation (PS3, Xbox 360). The thing is though, so many games come out and get quickly discounted that I wonder if the price will even matter much in a few months when you can easily snatch-up a boxed copy for maybe 15 bucks of the less-advanced copies and a digital version goes on an inevitable 20-dollar sale, even for the fancier-versions of the game.

All of that makes price kind of a non-issue, as long as you're willing to wait to play the game. However, if you must play the game now and are worried about the cost I would recommend finding one of the few remaining video-stores or going to a Redbox kiosk, where PS3 and Xbox 360 versions of the game can be had for a relatively-cheap $2.00-a-night, and you'll only need one or two nights, because as I stated, this game is short.

Once I gained control of "Snake" in the game I found it only took me a bit over two hours to play through the main game/mission, and that was even with me listening to all the included back-story cassette tapes you have immediate access to that flesh out the story a bit. Then by the time I did the side-missions--which I also took slowly--I had played the game for basically a total of five hours. Yes, I could go-back and find all the collectibles, do the missions on a harder difficultly, all that jazz, but that doesn't change the fact I had effectively beaten the game within five hours. The short length has had people use words varying from the angry and insulting--"Over-priced demo"--to the understanding and apologetic--"A sampler of what's to come".  Regardless of your feelings about length the question remains, is the game fun? To that I can say that yes, it is. 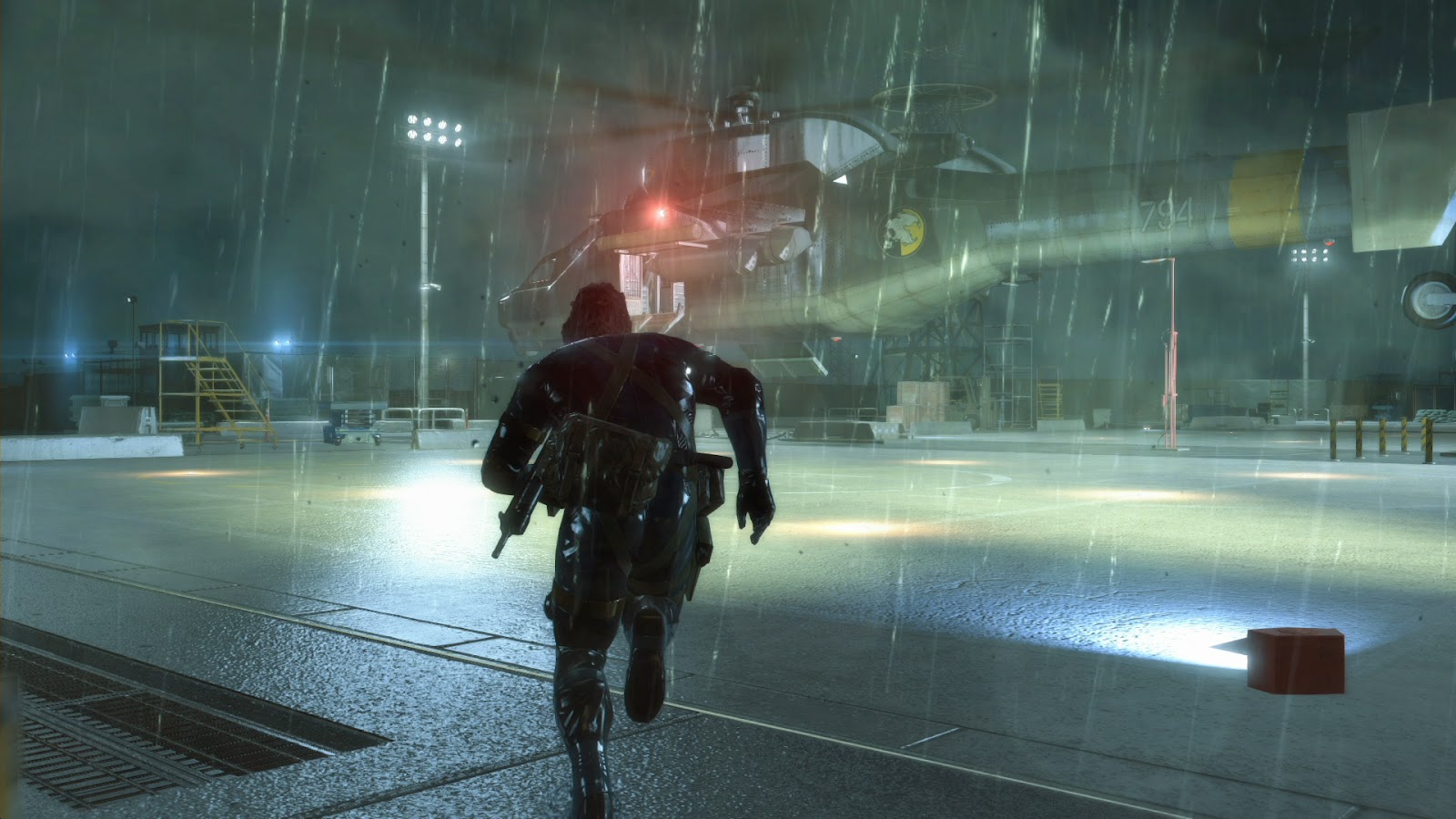 I myself greatly enjoyed the time I played "Ground Zeroes" for, because just as gaming has evolved over time, the Metal Gear series has followed suit. Controls are even more dynamic and easier to use now, making it feel much more sensible to play the game in an action-style way, even though I myself always prefer a good sneaky run-through. The inventory has been heavily streamlined and no longer will you be juggling 20 different weapons and items, instead finding yourself with a small-but-useful supply of guns and explosives.

The plot is extremely straightforward (and surprisingly dark, but more on that shortly)--especially for a "Metal Gear" game which is a series that loves to wander into random side-plots and nonsensical story-elements that somehow make it actually more endearing. No, this is a simple rescue mission and most of the silliness many have come to associate with Metal Gear is nonexistent, which had some asking if maybe the game was trying too hard to be professional, losing a bit of the zaniness. It also doesn't help that instead of the classic voice of Snake we are used to (David Hayter) we get a decent (but not amazing) Kiefer Sutherland stepping into the role--although rumors persist that is all a clever ploy by the often-tricky director of the series, Hideo Kojima, to make us just think Hayter is gone from the role.

Another element that makes it apparent the lighter-elements are gone is just how depressingly dark and gritty the story is. We've got subjects few games dare broach from questioning how constitutional our sites such as Guantanamo Bay are, to exploring state-sanctioned torture, the use of rape as a weapon by male soldiers against female ones, and all kinds of things that make this game more disturbing than any "Metal Gear" before it. In exploring more touchy-subjects and doing it in a mostly-responsible way it kind of feels like "Metal Gear" is effectively growing as a series, even though I miss the silly stuff too (the rape element seems forced and in poor taste, however). Some have been relatively upset by just how tonally different this entry in the "Metal Gear" canon is from other games, but I think that considering how short the game is that when the next-game/main-game after this prologue comes out, "Metal Gear Solid V: The Phantom Pain", there may be more funny-stuff mixed in with the new super-seriousness, resulting in a better balance than a person can get a sense of from such a short game as this one.
I realize with all this talk of length and tone I haven't touched at all upon the graphics. Well, those are startlingly beautiful. I played "Ground Zeroes" on a Playstation 3 and even with that being the "older generation" of consoles now, it still was gorgeous--especially the main-mission which takes place at night in a rain-storm. I've seen videos illustrating how the lighting and everything is even better on the new consoles, but even if I didn't get jaw-dropping graphics with my PS3, it all still was plenty good-looking. Should you have one of the new consoles however, prepare to be even more amazed (especially with the PS4, which apparently does some more atmospheric-stuff with clouds and such than the Xbox One).

"Ground Zeroes" is an incredibly short game, but during the time you are playing it there is at least immense fun. Still, I can't help wishing there were more to do after those first few-ish hours of "Ground Zeroes" besides finding collectibles and replaying missions. Also, I miss the lighter tone and over-complicated plot that usually occurs in "Metal Gear" games too, although I am all but sure those elements will be more apparent in the upcoming longer game. Therefore, while I have loved some entries in the Metal Gear series and wouldn't hesitate to reward them 5 out of 5 stars (1, 3, and 4 would be examples of this, 2 was maybe a bit too weird to earn a full 5 stars), such a short game as this which is fun but also missing many of the elements that make "Metal Gear" the series we love results in a title that is very solid, but not quite at that level of near-perfection.

I hold out hope that "The Phantom Pain" will be as much as masterpiece as some of the previous games in the series, but for "Ground Zeroes" I award a still-impressive 4 out of 5 stars. I would say to just maybe wait for it to go on sale if you can't rent it, though.