Not Just An Amazing Turnaround, But Flat-Out Amazing--Black Panther #516 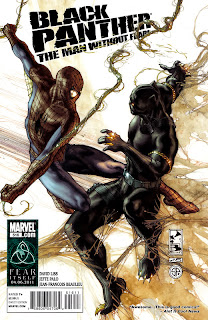 Black Panther: The Man Without Fear #516
I'll admit it, I've given this series some harsh words. I wasn't big on its use of Luke Cage, I was getting bored with it seeming to meander about, and it didn't seem to have a focus, as if David Liss didn't know where he was taking the story. Then I see Spider-Man on this cover and expect some lame team-up issue that will be dull and cliche. Well, I"m not above admitting I was horribly wrong and this was an incredibly awesome comic.

A ton of story is jammed into these pages, with all the things that seemed pointless actually all coming together as important now. The weird way the story spent time with that woman who had a crush on our main character? That has a twist I didn't see coming. The youngest child of the mobster Vlad? We learn there is a lot more to him too? Oh and Vlad? Well, he just keeps becoming more and more interesting, showing that despite being foolish in some ways (thinking Black Panther killed his wife despite everyone pointing out it doesn't make sense) he is cunning and genius in others. 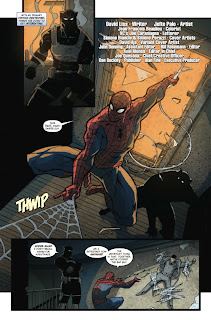 Oh, as for Spider-Man, his showing up actually does make sense, and he contributes to the story instead of detracting from it, with potential future conflicts being set up in the story through his interactions with T'Challa (AKA The Black Panther). Speaking of things that contribute to the story, Jefte Palo has some great artwork which is just gritty enough to seem serious, but also has a kinetic style that compliments the action scenes too.
I doubted David Liss, claiming he had a messy jumble when instead I just didn't see the puzzle pieces and how they would start to fit together. The synching up of all the plot-points, the great dialogue, the amazing art, this is just one fine comic.
5 out of 5 stars.
Posted by David Charles Bitterbaum at 7:08 PM