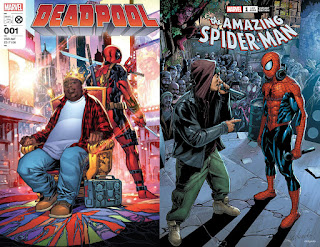 I don't really buy store-exclusive variant covers. Comic shops can buy the rights to have a variant cover from a publisher and as long as they front the cash and get the cover approved by everyone, the comic gets made. Store variants can be pretty but don't have much speculation value, generally being considered worth less even if they are a key issue compared to the version of the comic you could buy in shops. That said, sometimes store variants seem to strike just the right nerve and become quite popular (at least for a bit). That has happened with some hip-hop covers featuring popular rappers.

The Haul did an exclusive variant cover featuring Notorious B.I.G. and Deadpool. It took a bit to sell out from their site but once it did the price kept creeping up from the initial $30 to over $100. Then, some covers with Eminem dropped via his website and people eagerly scooped those up. Now, some are selling online for $200 or so. Perhaps it is the combination of fandoms that has resulted in these being quite popular? It is hard to say, but it would not surprise me if we start seeing a bunch of rap artists on more comic covers now that it is clear there is some money to be made.