Build-A-Bear Adventure is a Fun Place! 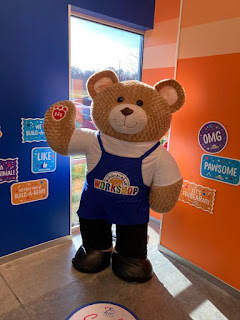 Our son, Clarkson, went to a friend's birthday party today at an interesting new concept that Build-A-Bear has created called, "Build-A-Bear Adventure." The company actually originated in Saint Louis so they have tested-out various business ideas in the region before with this being the newest cool thing.

You can check Build-A-Bear Adventure out at its website where you'll see the idea is you have a fun combination of activities. You get a party room where you can all enjoy birthday grub, everyone builds a bear, and then there is an arcade area for folks to play in. It is a bit like Build-A-Bear and Dave and Busters had a baby. The website says how it is great for everything from birthday parties to school outings, bridal showers, baby showers, and so forth. I know we all had fun! 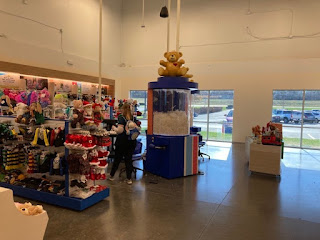 Our visit to Build-A-Bear Adventure started with us checking in at the entrance and going to our party room. Once everyone had arrived we went to the area for building our new fuzzy friends. Certain bears and outfits were included with the party but folks could always add on other outfits or bears/creatures (I saw Sully from Monsters' Inc. for example, he was cute). After all the kiddos assembled a bear we went back to the party room and had pizza and treats.

Then, we went over to the arcade area. There was everything from racing games, to games that awarded (digital) tickets, crane games, and a really cool one called, "Water Fantasy," that shot actual water onto a video screen and had the creatures in the game getting shot with water reacting. That was wild. Clarkson loved running around the arcade area with his friends and seeing all the fun games lighting up. 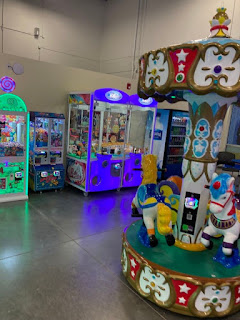 Everyone had a great time at the Build-A-Bear Adventure. We appreciate our friend inviting us for such a fun birthday party and I'd encourage anyone in the Saint Louis area who needs to have a party to check out Build-A-Bear Adventure. Assuming it does well I bet they'll be expanding the concept into other areas as well before too long in the future!