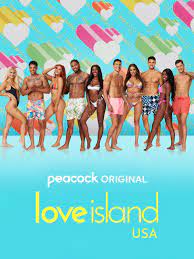 "Love Island," is an immensely popular franchise in the UK and it has had three solid seasons of an American version. It aired on CBS but due to a lot of money exchanging hands, it is now a Peacock exclusive. I guess NBC wanted to put it on their streaming service to lure more people over to it. Thankfully, we can get a year free (yah!) of the service as long as we don't mind ads (boo!) thanks to our cable provider having a deal with Peacock/NBC. Now, "Love Island," will premiere today at 9PM Eastern on Peacock and has been retooled a bit. The host is Sarah Hyland of, "Modern Family," fame instead of Arielle Vandenberg and the announcer is no longer Matt Hoffman--whom I enjoyed--but the voice of the British version (now doing America too), Iain Stirling.

A bit has been changed but as long as we get some messy drama in the form of people hooking up and catching feelings way too fast I'm in. Plus, if we're on Peacock we don't have to bleep as many bad words or edit as much, I assume? Perhaps Peacock is smart in snatching this up in the hopes of drawing us reality television junkies. I've downloaded it and eagerly await this evening. We shall see how fun this slightly-altered version is when the show keeps giving us new episodes six (yes six) days a week!