Gail Simon and Phil Noto's New Comic, "The Variants," is a Fantastic Debut of a Jessica Jones Story 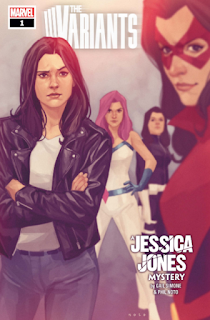 One of my favorite comic runs is when Brian Michael Bendis wrote, "Alias." It served as a bedrock of sorts for the Netflix show about Jessica Jones and she has since appeared in other comics ("The Pulse," various, "Avengers," titles where she and Luke Cage got married, some sequel-ish series penned by Bendis and others). Nothing has quite scratched my itch for that classic, "Alias," vibe (although when Bendis revisited Jones for a chunk of issues in her self-titled series it felt close thanks to Michael Gaydos doing art on that one like he did on, "Alias," back in the day) until I read this new debut issue of, "The Variants."

Written by the immensely talented Gail Simone with great art by Phil Noto, this issue excels at marrying the grounded detective story vibe I love with Jessica Jones while throwing in a unique wrench in the form of some possible multiversial shenanigans. Even though Jones and Cage have a lot going on in their lives in Marvel's comics (Luke actually was elected mayor in the, "Devil's Reign," event), this comic avoids touching upon any of that beyond mentioning how Jessica's old foe, the Purple Man, is currently in a coma (as also happened during, "Devil's Reign," but that is unnecessary to know). It seems there may be a trap in Jessica's brain, but before she can really worry about it other versions of her seem to be appearing, variants, if you will (the term recently used in the, "Loki," show and now popping-up in the comics). The issue ends on a cliffhanger with it unclear what exactly the deal is with these variants, but I'm eager to learn more. Between Simone's stellar writing and Noto's amazing art this is a great read!