That Teaser For the New Predator Movie, "Prey," is Snazzy 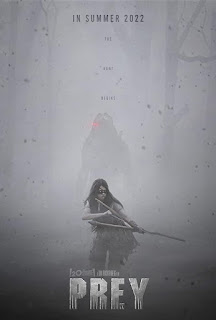 I'm not going to get my hopes up too much over a 45-second teaser trailer, but the new Predator-themed movie titled, "Prey," does have a spiffy one. I am a big fan of the, "Alien," movies as well as the, "Predator," ones so it pains me sometimes to admit both have had more medicore-to-bad flicks than good--including the ones where they fight (although the first AVP is kind of dumb fun). Here is the teaser:

The last movie to feature a Predator was simply titled, 'The Predator," and reading the behind-the-scenes drama about how it got made was more interesting than the movie itself. Then there were rumors a movie about a Comanche warrior facing off against a monster was secretly a Predator movie from a director known for liking to keep his flicks kind of secretive, Dan Trachtenberg of the mostly-good-till-the-end, "10 Cloverfield Lane."

I am all for a Predator-themed movie set in the past that tosses out a bunch of the extra continuity we got in, "Predators," or, "The Predator," and just focuses on what the first two movies did well--a creepy alien hunting people in an extremely unfair manner thanks to all its weaponry. I can't say for sure if, "Prey," will do that, but if it does then it already has a big leg-up over a chunk of the other Predator films. We shall see when it premieres (on Hulu of all places) this coming August 5th.