The New, "Savage Avengers," #1 Gives Us a Wild Team Within a Great Debut Issue 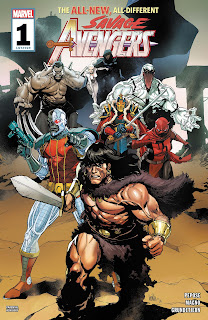 I really enjoyed the first volume/run of, "Savage Avengers." It featured a mish-mash of a team that included Conan the Barbarian (whom Marvel had gotten the rights to use before he enters the public domain in a handful of years) and was quite zany and funny. Now, the series is relaunching with an even more fascinatingly random team that features Conan at its core again. Written by David Pepsoe, this is his first Marvel work and I've enjoyed his other stuff before. The art is by Carlos Magno and he does a stellar job too.

Marvel will be losing some of the rights to Conan in the near future but can utilize him in, "Savage Avengers," as long as they don't use his name on the cover or such, apparently. In a meta-style twist, there is a Deathlok trying to erase Conan from continuity itself too--and a really random assortment of heroes come together (even more interestingly odd than the last series) to assist Conan. Cloak and Dagger, the Elektra version of Daredevil, Dane Whitman's Black Knight, the Flash Thompson Anti-Venom, and Weapon H of all characters form this sudden team. To Pepose's credit, he makes such a weird jumble work quite well with it being fun to see such a strange mixture of characters interacting. Magno illustrates the fighting spectacularly, making the action scenes pop with delight. It's fun stuff. 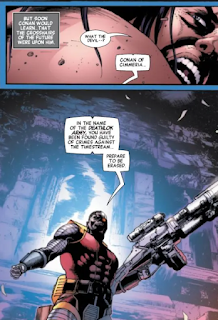 The first issue of, "Savage Avengers," does a wonderful job putting the whole team together quickly, introducing a threat for them to combat (the Deathlok who is after Conan), and manages to be very fun and look great too. It is a great debut issue and I'd rate it...

Posted by David Charles Bitterbaum at 10:42 AM