"Grim," #1 is a Great Start to the Latest Big BOOM! Release 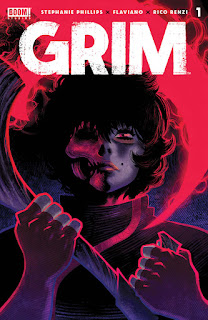 The publisher BOOM! has put out a number of quality titles for some years now with, "Something is Killing the Children," being one of their most massive hits lately. The next big release is unrelated to that Universe but also has a bit of a snazzy horror vibe. Titled, "Grim," it gives us a lot to chew on in a jam-packed first issue that left me eager to read more. Sometimes comics get going too slowly, but, "Grim," just hits the ground running. Thanks for this is owed to writer Stephanie Phillips who isn't afraid to have us readers asking questions with answers coming (assumably) later.

We are introduced to a grim reaper named Jessica Harrow who can't remember how she died but now, along with other reapers, claims souls who are dead. She takes one such recently deceased person over a River Styx of sorts to an otherworldly waiting room and then some other fun little plot twists happen to really pique our interest too. It was good stuff. 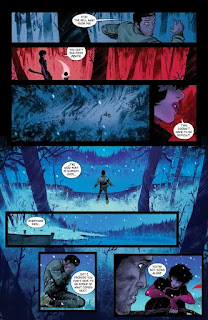 Props are also due to Flaviano, the artist, and Rico Renzi, the colorist. The illustrations are fantastic, making the, "Real world," and the world of Death/afterlife/etc. both stand out as different and intriguing. The deep reds we often witness in the post-life realm are eerie and the supernatural elements coexist with the grounded stuff stupendously thanks to the art and colors. It's a gorgeous comic.

The first issue of, "Grim," gives us the basic plot, establishes some delicious mysteries, and has fantastic art and colors. It is a marvelous first issue and I look forward to seeing where the series goes. I give this debut...