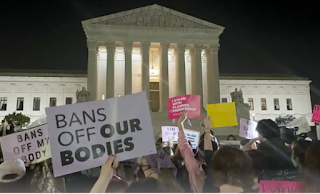 I could go on about this for hours so I will try to be relatively succinct. A draft majority opinion leaked from the Supreme Court indicates that the conservative majority will be overturning Roe and abortion rights will lose all Federal protections. Yes, Justices who claimed that abortion rights were, "Settled law," or had, "Precedents," were, of course, lying and legislating from the bench with their own personal views impacting National policy. You know, lots of conservatives claims they value privacy and liberty and hate justices who let politics influence their decisions, but as soon as it comes to abortion, LGBTQ+ rights, and the like they love the Federal Government getting in people's business. I am disgusted. CNN keeps updating the news as things evolve, but the outlook is not promising.

Apparently, women or people who identify with other gender identities but who can give birth are nothing more than ovaries and uteruses on legs. We can't trust them to make their own decisions about their body and now it is a decision states get to make with about half of them chomping at the bit to ban abortion in almost all cases. I have been open in the past about my own family's struggle with losing a pregnancy and how because we had a heartbeat even if there was no way to have a viable baby we had to have what essentially counted as an abortion. I wrote back in 2020 this paragraph in my post about that:

"Even if we lived in a state that had outlawed abortion the procedures would have been allowed as this was a medical situation, but it is scary to think how much more paperwork there could have been or how much longer things could have taken. Samii could have died due to too much legal junk, and there was already a lot of legal junk we had to sign while sobbing because we wanted this baby, we just couldn't have it. Sometimes people who lose their babies become very anti-abortion. If anything, this has shown me how private a choice it is for a family to decide if they have to terminate a pregnancy or not. This is something that should be up to a family and their doctors. The doctors told us everything and it was clear after having all the facts laid-out there was no way to keep Samii and this baby alive. We truly appreciate everything all medical teams at Mercy and BJC did. We were in the midst of one of the hardest weeks of our lives and being given accurate facts and data allowed us to know what to do in order to save the life of my wife."

Now, however, plenty of people will have the Government sticking its nose in their extremely private and extremely painful moments. This is a violation of civil rights and as others online have pointed out, this is just a hop, skip, and a jump away from the Supreme Court overturning other rulings such as ones that granted the right of same-sex marriage. It seems like instead of a United Country we want to have little conservative fiefdoms carved out in some states that forbid any progress made in the last 50 years or so. I'm outraged, feel sick, and would say I'm shocked, but I'm not. This has been the endgame of the Right-wing for decades. They kept slithering their way into power and chipping away at abortion rights until they could break out the sledgehammer. They would go on about personal liberty, taxes, and jobs, but then use their power to fight any kind of social progress. Here we are in 2022 and abortion rights look like they're due to be overturned shortly with other progress soon to follow.