Marvel Went and Changed the Punisher's Logo for Obvious Reasons 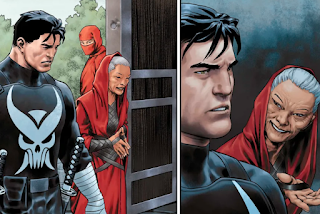 The Punisher and his logo have had a problematic history as of late. It used to just be a cool-looking skull symbol worn by someone everyone agreed was basically a bad guy who killed even worse people (in his mind, at least). If folks had a Punisher logo they just maybe liked the comics. Then the logo started being sported by people like military members, police, and others who you would hope don't draw inspiration from a murderous vigilante. In an effort to be able to use the Punisher in comics and essentially reclaim the character, Marvel is going to be doing a new Punisher comic with a different logo going upon his chest. Frank Castle will be working with the assassin's guild known as The Hand (for some reason) and his insignia will morph into something a bit devilish in appearance. It's gonna be a 13 issue maxi-series simply called, "Punisher."

I'm a little wary of Marvel trying to reinvent the Punisher in any drastic way because that's been done before and we got a Punisher who shot heavenly bullets at demons (it was weird). That said, the writer of the upcoming maxi-series is Jason Aaron. I either love or hate a lot of Aaron's stuff, but his work on Punisher under the Max label was really solid--and he had the unenviable task of doing it after a long Garth Ennis run but still managed to create something quite good. Art will be done by Jesús Saiz and Paul Azaceta--they'll be alternating duties depending on if a scene is set in the present or past. 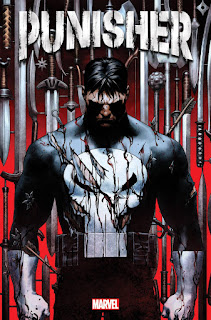 I'm cautiously optimistic this might be an interesting run on, "Punisher," especially if it doesn't hesitate to lean into all the controversy surrounding Frank Castle and his skull insignia. As this is a corporate comic from the House of Mouse (Disney, of course, owns Marvel) I won't hold my breath for anything too edgy, but we shall see!

Posted by David Charles Bitterbaum at 9:33 AM