Image Won't Publish the Fourth Issue of, "Second Chances," and Just is Gonna Release the Trade 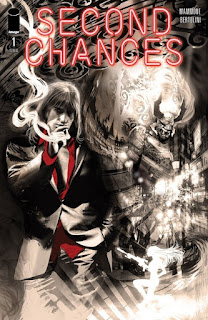 Update: I posted about this on Twitter and my friend (who is also a comic creator), Larime Taylor, pointed out how sales are probably low enough that the creators would end up owing money if the fourth issue came out, which would result in getting trade profits deducted from them. They make a good point as I don't want the creators to be at a disadvantage.

Something that annoys me is when a comic is coming out with individual issues and then suddenly we learn some of the last issues will not be coming out. Instead, the series will be resolved with a trade paperback which will require anyone interested in the comic to buy the whole TPB. Image is kind of doing this with the series, "Second Chances." The fourth issue will be digital-only and if you want a physical copy of it you will have to buy the trade paperback collecting all four issues. There will be no printed fourth issue. The only thing worse than this is when a comic is outright canceled and we just don't get the final issues because a company doesn't want to bother releasing them. I vaguely recall this happening with a Marvel series that didn't get its fifth or sixth issue but I can't recall the exact name--this happened with the recent, "Gwen Stacy," comic too, I believe, but I digress. I only read the first issue of, "Second Chances," and found it decent, but those who have been picking up every issue are surely annoyed.

When you're told a comic is going to be a certain number of issues you either expect those issues to come out or maybe if a comic is really popular it goes from a mini-series to an ongoing series. You don't expect something to suddenly not come out anymore, however. This is lame.