The Debut Issue of, "Hulk," by Donny Cates and Ryan Ottley is a Little Confusing, Pretty Fun 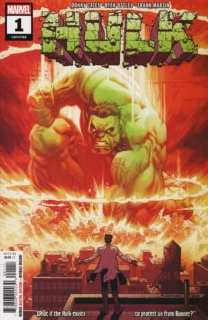 I reviewed the final issue of, "Immortal Hulk," and had fond feelings about the 50 issue run of that title. It was amazing and beloved by tons of readers. Then it was announced Donny Cates would be writing a new Hulk comic with Ryan Ottley on art. Simply titled, "Hulk," it faces some impossible expectations after a run some are calling the best Hulk comic ever. All Cates and Ottley can do is try and make a fun Hulk comic without worrying about what came before too much. That seems to be what they're doing.

This issue of, "Hulk," opens with Bruce Banner having turned the Hulk into something he can pilot while still totally mentally in control. The Hulk has become less an unfocused force of rage than a tank Banner is piloting. Vague mentions are made of an event in El Paso that we do not get to mention, and the comic does make a fun little callback to the previous run with Banner remarking he is trying to break into a base Tony Stark (Iron Man) has with a unique armor because while the Hulk might be immortal, Banner isn't. 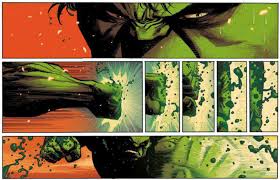 This issue raises a lot of questions about just how Banner has been able to tweak the Hulk in the manner he has and why Banner is really acting more villainous than we usually witness in the pages of Hulk-related comics (usually the Hulk fights other heroes when he's having difficulties, not Banner). It's odd and has my interest. Plus, Ottley's artwork is just gorgeous. Ottley knows how to illustrate epic fight scenes as his work on, "Invincible," and other titles shows, and he doesn't shy away from some kinetic and surprisingly violent moments with, "Hulk." The Hulk can take a lot of damage and keep going, as Ottley makes abundantly clear as the page fills with green blood. It's nasty yet gorgeous, if that makes any sense.

This first issue of, "Hulk," is a big tonal departure from, "Immortal Hulk." It is unfair to compare this to that previous run that just wrapped, but I and others can't help it. This is much more of a mystery and sci-fi story than the strong horror-vibe we witnessed in, "Immortal Hulk," but it's still a good debut issue. I'll be interested in seeing where this goes.