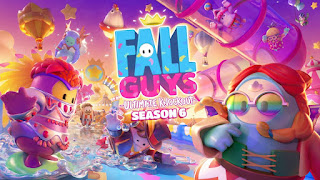 I've written previously about how our household enjoys the game, "Fall Guys." Clarkson always laughs when I play it and the little players run around. The game just launched is sixth season. The last one was a jungle theme which was fantastic. Before the jungle theme, some other seasons happened that involved medieval vibes (it was okay) a weird electric sci-fi style (it was decent), and a snow theme (that was one cool). The sixth season is all about parties. It is a celebration theme and it's full of wild see-saws, water balloons, and tubes straight out of a Mario game. It's pretty cool.

With any new season, it takes a bit to adjust to little tweaks in the gameplay. That's part of the fun, however. "Fall Guys," always manages to keep players on their toes and throws little twists into the game that allows everything to stay just a smidgen unpredictable. This new party theme is good fun and I quite like it so far.