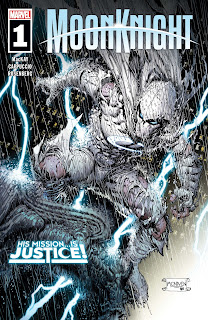 Marvel has relaunched a new Moon Knight comic as it's been a smidgen since he last a had series, that Disney+ show is on the horizon, and because Moon Knight is just plain awesome. The character has had some stellar runs and some terrible ones, so I wondered what we'd be getting with this latest debut. Having read the first issue, I'm quite pleased.

The writer of, "Moon Knight," for this run is Jed Mackay who has been doing stellar work on a variety of titles including, "Black Cat." Art is provided by Alessandro Cappuccio. This is their Marvel debut, having done other comics such as, "Power Rangers," for BOOM! Studios. To bring everything together nicely, Steve McNiven provides the ,"A," covers and has really brought his, "A," game, if you'll excuse my terrible pun. Anyways, I know Mackay's writing so I had optimism in that regard and I looked into Cappuccio's artwork and thought it could be snazzy too. I was right to be hopeful as this #1 does a lovely job introducing new readers to Moon Knight and giving us big fans plenty to chew on too. 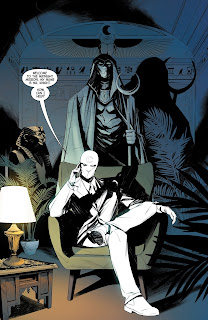 Basically, Moon Knight now is offering his services to those in need during the nighttime in any part of the city he marks as being under his protection. You can call him or stop by an office. By day he talks with a therapist the Avengers requested to serve him. The recent (awful) arc of Avengers he popped up in is acknowledged briefly (where he was pretty out of character and tried to steal a bunch of other heroes powers to help Khonsu take over the World...it was odd), but the main focus is on the contradictions he lives with.

He's Jewish and serves an Egyptian God. He was arguably a war crime-committing mercenary for hire who turned into a hero. He has mental illness but also has dealt with actual supernatural and superpowered elements that would sound insane except for actually existing within the Marvel Universe. Whether he's getting therapy or fighting monsters during the nighttime it all looks gorgeous with Cappuccio's art and the dialogue flows wonderfully under Mackay's pen. 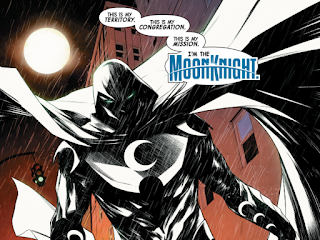 This is Moon Knight as I like him. With some dry humor but not outright trying to be funny (the Bemis run attempted to be quite comedic and was terrible). A little brutal and willing to go further than other heroes but still not a villain or anti-hero to the degree someone like the Punisher is. We get some hints of new future conflicts (an individual named Hunter's Moon is clearly going to be in disagreement with Moon Knight) and I am just happy to be reading a Moon Knight comic I enjoy again after--as I mentioned--the mess that was the last run by Bemis, a writer I actually usually enjoy. If this first issue is anything to go by, we're in for a wildly fun ride with this run of, "Moon Knight." Now I just have to hope it goes for a good long while!

Posted by David Charles Bitterbaum at 8:30 AM