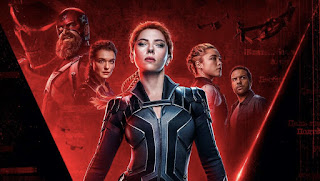 On Thursday night I did something I hadn't done for nearly two years. I saw a movie in a theater. Like, an actual movie theater. I felt comfortable doing so as I've been fully vaccinated and the theater was only half full (not due to any rules, but because Thursdays are not as huge for movies as the weekend). I saw, "Black Widow," with my brother-in-law, Kyle, and we both enjoyed it!

"Black Widow," serves as a prequel of sorts, focusing on the time right after, "Captain America: Civil War," where Nathasha (Scarlet Johansson) was on the run for going against the Sokovia Accords that made heroes need to register and be official government agents. The fact this all takes place before things got quite real in the, "Infinity War/Endgame," movies does have some folks asking, "Why does this movie matter if we already know what happens to Black Widow later on?" but my counter-argument to that is what do any of these movies matter? They exist to entertain us and I was indeed entertained by, "Black Widow." Also, without spoiling anything I will say it clearly sets up future characters to be important in upcoming Marvel flicks.

As I said, "Black Widow," is a bit of a prequel, focusing on how Natasha and a younger black Widow--Yelena Belova (a fantastic Florence Pugh)--take down the evil Red Room which trains future Black Widows who are young girls that are abandoned/kidnapped/bought and made into assassins. On the way to this conclusion of finding the Red Room, we get a lot of, "Family," drama as Natasha and Yelena quarrel along with father-figure Alexei (the former Red Guardian who is played hilariously by David Harbour) showing-up to bring some levity. Between the arguments and fights with agents from the Red Room, everything moves along briskly and I found myself consistently engaged with the flick.

If I had one major gripe with, "Black Widow," it would be that it has yet another villain who is utterly wasted--Taskmaster. In the comics Taskmaster is a man named Tony Masters who is a fascinatingly ruthless and at times hilarious character thanks to his wisecracks. Black Widow takes the character of Taskmaster, gives them a generic outfit, and renders Taskmaster basically completely silent. The, "Gimmick," of being able to copy all the moves of various heroes that are studied remains, but everything else is different. Taskmaster isn't a mercenary-for-hire, they work for the Red Room doing, "Special projects," and besides some cool fighting moves I just feel using Taskmaster in this movie was pointless. 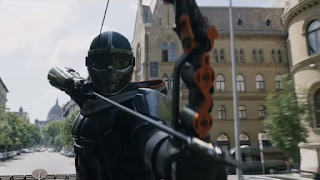 "Black Widow," is not the best Marvel movie ever, but it is good fun. Besides being yet another Marvel movie with a forgettable villain it excels at mixing drama, action, and throws in a solid dash of humor. In other words, it's another standard Marvel movie. Even if you're worried it doesn't, "Matter," much you should give it a chance, it's a good time.