"Wonder Woman: Dead Earth," Has Been a Stellar Read 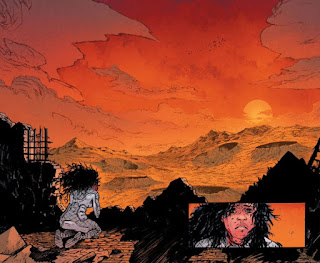 Daniel Warren Johnson has been both writing and illustrating the comic, "Wonder Woman: Dead Earth," and it is a fantastic comic so far. Two issues have come out in the large-sized prestige-format we've seen for a number of Black Label DC titles (of which this is one). I don't mind the bigger book with 48 pages of great content however, as the large size is especially perfect for the art of Johnson. The plot is pretty interesting, with Diana waking-up in a post-apocalyptic World and trying to figure out what exactly went wrong in-between fighting irritated monsters or dangerous human survivors, but the art is what steals the show. 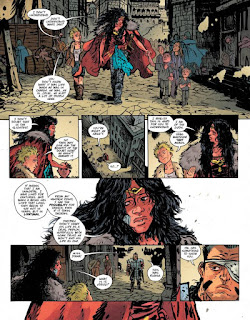 Daniel Warren Johnson is an illustrator few can compare to, and he makes the end of the World look damn good, even if it is a lot of burned-out buildings and ruined brown soil. I believe this series may just be three issues total that come out every couple of months. This is a shame as after the two issues that have come out so far I'd be more than willing to read Johnson writing the travels of Wonder Woman at the end of the World till the World actually does end. With that said, I recommend picking up the two issues that have been released so far of, "Wonder Woman: Dead Earth," or to be sure to get it once the whole story is collected if you choose to wait until then.
5 out of 5 stars.
Posted by David Charles Bitterbaum at 6:16 PM