Flashback Friday: The Last Time a Comic Utterly Shocked Me 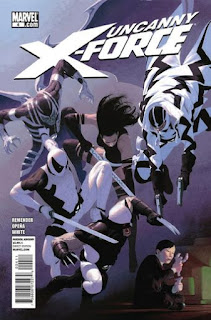 I was thinking about the last time a comic came out of nowhere and surprised me, and it has been a bit, but man was it a shocker. Normally comics solicit certain storylines in advance so you have an idea what the future holds, or a seeming twist is undone quickly. Well, not in my most recent case, which is actually from a bit ago (2011), but still the most recent time I went, "Oh my goodness! I didn't see that coming!" Yes, I literally said it like that.

"Uncanny X-Force," #4 came out in early 2011 and followed a team of mutants who like previous X-Force teams were kind of a special-ops. This series involves them learning how the evil Clan Akkaba has created another rebirthed Apocalypse and the X-Men need him gone before he threatens the World. One hitch to their plan--he is currently in the body of a young kid... 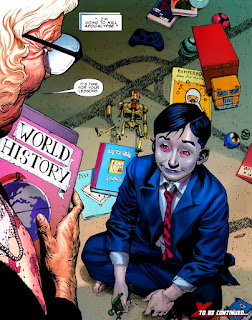 Yes, Clan Akkaba figured the best way to create the perfect version of Apocalypse was not a fully-grown version that seems to always fail fighting humans and mutants alike, but a young boy who is a blank slate that can be taught everything he needs to know. He currently has hurt no one and even seems sweet, but he has horrific potential if his mind is poisoned by the Clan Akkaba.

By the time X-Force stumbles upon this young version of apocalypse they immediately realize they can't kill an innocent kid regardless of his genes as that is what humans have been wanting to do to all mutants for years. They start discussing how they'll take him back the X-Men mansion to raise him right and it all seems to be how you'd expect this to go do until there is a loud, "Bang," drawn and then this: 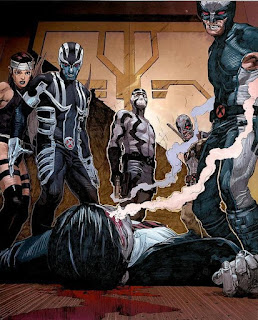 Fantomex, who had said nothing, shoots the kid silently.  The rest of the issue is them--without many other words--evacuating back home, upset and startled. I honestly did not see that coming, and later it is revealed how Fantomex takes some of the blood to create his own Apocalypse clone in a simulated reality he names, "Evan," in the hopes of testing-out if maybe there could be a good version of Apocalypse (the character went on to pop-up in various X-books) and he was too rash.

Even if that extra step of cloning an Apocalypse designed only for good counters a bit of the initial brutality, I was dumbfounded to see even one member of X-Force would, "Go there," when generally the plot would not do as such. I guess writer Rick Remender wanted to surprise us all (with artist Jerome Opena making everything look great too). The new team finds itself forever a little shaky by what it had to do even if they learn about the helpful clone later on. The rest of, "Uncanny X-Force," was a solid run, but nothing could live up to the bewilderment I felt reading issue #4. So, 2011 was the last time a comic utterly shocked me and hopefully, another one will again sometime soon.
Posted by David Charles Bitterbaum at 4:05 PM