With a Single Poster, "WandaVision," Has Piqued My Interest 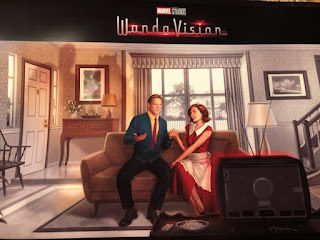 The relationship between Wanda (the Scarlet Witch) and Vision (the, um...Vision) was always one of the sweetest low-key things in the Marvel Cinematic Universe that seemed to happen nice and organically as opposed to how they shoe-horned in some other romances (Bruce Banner and Black Widow suddenly being all close). In the comic-books it was a nice and happy story too, until later on when things got weird with Wanda's powers causing all kinds of twisted things to happen that were warping reality in dangerous ways (creating children out of thin-air considering Vision was incapable of having kids, stuff like that). The poster for the upcoming, "WandaVision," show has my attention because it seems to be hinting at the very same, "Things look nice but something is horribly wrong," vibe the comics eventually tackled.

It may sound odd to say a poster gives me hope, but compared to all the other Marvel movies or super-hero shows that have gotten posters, "WandaVision," is the only one where stuff simply looks the least bit weird or different. All the other new Marvel posters of movies or even shows just look like the standard image of a hero (or heroes) standing and looking stoic with bad-guys sometimes in the background appearing imposing as well. For real, look: 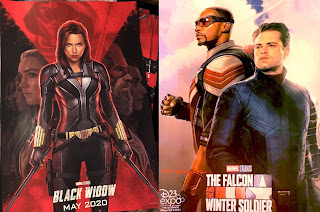 It is drab, and as the Marvel Universe has a number of movies that are starting to just feel like one big formulaic method (in the, "Avengers," films especially) with only some key standouts recently ("Black Panther," was a delight and "Doctor Strange," was incredible, no matter what haters say about Strange) I can appreciate a Marvel property being able to do something a little bit different, which it seems Disney+ will be good for allowing some deviation from the usual somewhat-homogeneous vibe of the movies. I'm full down for a surreal nightmare-sitcom starring the Scarlet Witch and the Vision, in other words. If it is at all like the amazing, "The Vision," series by Tom King that focused on the Vision trying to have a normal suburban life while horrible things happened, that will be a good thing as well, because that comic was bonkers (in a good way).
Posted by David Charles Bitterbaum at 10:30 AM