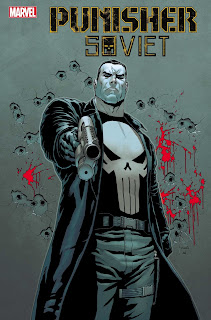 Garth Ennis is one of those writers who even if he is barely putting forth any effort makes really good comics. Creators who spend decades in the field either get better and better to the point where any title they do is solid or slowly decline to the point they go from amazing to terrible. Thankfully, Ennis has just generally gotten to the point his worst works are damn good and his best works are incredible. Some of his best work has of course involved the Punisher, so hearing that he will be doing some new mini-series involving the Punisher as well as (I assume) his take on a really old and grizzled Nick Fury sounds cool. Also, it is icing on the cake that two illustrators I love the work of--Jacen Burrow and Goran Parlov, will each be doing one of the books.

The comics will be, "Punisher: Soviet," with Burrows doing art on that and, "Get Fury," with Parlov. These books will most likely be out-of-regular-Marvel-continuity and probably have a MAX label if Marvel digs that imprint up for these books or some other, "Mature Readers," advisory because Ennis loves his comics gory and full of unique-takes on the word, "Fuck." I'm not a huge fan of the Punisher generally, but a creator like Ennis almost always does him justice so between Ennis and some fantastic artists I'm excited.
Posted by David Charles Bitterbaum at 10:34 PM