They Kept a, "City of Heroes," Private Game Server Secret for Six Years...What, How? 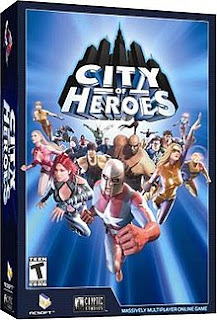 One of the first Massively Multiplayer Online Role-Playing Games (or MMORPG) I ever played and enjoyed was, "City of Heroes," or, "COH," for short. I had tried, "Ultima Online," over dial-up but was miserable at it. However, when I later had broadband-speed internet and found myself in a colorful world of heroes and villains just like in my beloved comic-books, I adored it. I made a bizarre-looking character with a robotic face but a snazzy two-piece brown suit whose name I sadly am unable to recall. Rest assured though, he looked both imposing and classy when I'd hover him around, beating-up the underlings of assorted zany bad-guys.

As with many online games, "City of Heroes," was shut-down when there wasn't enough money to be made from it by its developer, NCSoft. It officially ceased to exist November 30th, 2012. I went on to play, "World of Warcraft," off and on for some years and haven't done much with MMORPGs since besides a short stint trying not to constantly die in, "EVE Online." There had been efforts by fans to make an approximation or some kind of private server of the game for years, but nothing had really come along especially well--it was all quite basic or got hit with a cease-and-desist letter from NCSoft who didn't want anyone messing with their intellectual property, even though they'd basically killed it. That was it then, right? Actually, there has been a fully-functional private server of the game kept secret for six years with all the original data so that you could actually get your old character and bring it back. Wait, what?
It is the 20-teens, as some folk call them. Nothing stays hidden. Top-secret political documents get leaked all the time, celebrities with high-tech encryption still get their phones hacked and nudes posted online against their will. Hell, if I even mumble out loud how I need a new frying pan, it seems like either my phone, Echo Dot, or some other device hears this and as if by magic within a day my Facebook feed is splattered with advertisements for frying pans. Nothing can be kept a secret now, and you're telling me there was a group of individuals who for six years (forming not too long after the game shut-down) were able to have thousands of people keep this huge secret? Everyone manged to keep their mouth shut that they had acquired numerous pieces of code and data through their own work and the assistance of people who had been employees at NCSoft developing the game? This is both fascinating in that these people should probably be put in charge of our Nation's secure documents and enraging in that I would have loved to know this and, you know, played the damn secret game. The mixture of shocked delight and anger about, "COH," having been secretly alive all these years with the code-name, "SCORE," has ripped the small community of people who fondly remember the game apart.
For all this time anyone who thought such as SCORE existed but weren't privy to the secret were called conspiracy theorists, making it darkly funny how all along this utterly insane theory was true. This is akin to finding out that Tupac has been alive all along and releasing music to a select group of fans who refused to share the news/music with anyone else--it is startling and it makes you mad for being left-out and called insane all these years you argued Tupac was alive (disclaimer: I do believe he is dead, no matter how sad that makes me). How did the truth come to light, however? As with most of the time when sensitive documents leak, someone had an ax to grind.

A Youtuber named Destoyer Stroyer who gained access to this invite-only server has stated he felt uneasy about all the secrecy, and was under the impression that if the people behind SCORE had access to old character data they might have their hands on other more-private information from people who used to play, "COH," such as names, addresses, and old credit-cards. Therefore, believing this whole thing felt wrong--and quite possibly realizing it would also get him a ton of viewers--Destroyer Stroyer made a video revealing the existence of SCORE to the world. Now the people behind SCORE are doing damage-control due to all these angry fans of the game upset they were left-out and for fear of getting hit with a big ol' lawsuit from NCSoft (the PC Gamer article I linked to earlier and will re-link right here goes into this further).
I am one of those players who would have appreciated even the chance to revisit, "City of Heroes," had I known about this huge secret server of the game that functioned perfectly whilst everyone else barely had their attempts at an emulation or server out of the early-planning stages. It makes me a bit sad, but it also is just fascinating this secret was kept for so long, with it thought around 3,000 people, "In," on this. Now as everyone gets over their surprise about this server existing, I only wonder what the fallout of such a wild reveal will be. Now if only Tupac would reveal he's been alive all along and this will be the most shocking week ever.
Posted by David Charles Bitterbaum at 3:13 PM