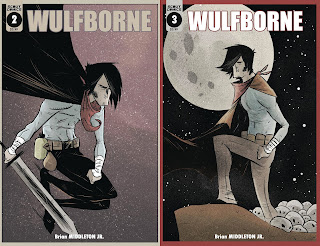 A bit ago I had a review segment where I talked about an assortment of indie-titles I was enjoying, including the first issue of, "Wulfborne." Its creator, Brian Middleton Jr. liked my review so much he asked if I would be interested in reviewing the second issue that had recently been published (it came out 3/27/19) as well as the upcoming third and final issue, due for release 4/24/19. I told Mr. Middleton I'd be happy to review the other issues and was provided a digital copy of the other two issues. Having now read the rest of, "Wulfborne," I would say I enjoyed issue #2 and #3 immensely!

The first issue of, "Wulfborne," has a more minimalist plot as an adventurer named Branwulf travels to meet a mysterious witch who can possibly heal his heartache. The later issues flesh things out a bit more, showing that Branwulf and a young woman shared a deep love, but she had to leave him to be the Queen of her people and now he rarely is able to see her. This has made him angry and lonely, so he's been seeking out a mysterious witch with an ethereal voice that has been calling to him with promises of being able to heal his heartache. Even though Branwulf encounters others who warn him the witch is not someone to be trusted (as well as violent guards of the witch), he fights his way to her and in the third issue they finally meet. The ending (which I won't spoil) actually surprised me a bit as I expected one element (Branwulf is a pretty violent guy) but not another (he can be surprisingly caring too). 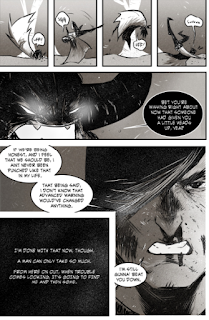 The art in issues #2 and #3 is stellar (as it was in the first issue), with Middleton illustrating everything in a style that is a bit abstract and cartoonish to some degree thanks to some very strange creatures, yet still has enough of a gritty, "Oomph," you really feel the damage done to Branwulf or his opponents during scenes of combat. The comic is in black-and white and Middleton uses this to great effect, with light from eyes or magical beams looking striking against the deep blacks, and other little touches (such as Branwulf gritting his teeth in the image above) creating gorgeous contrasts between the white, black, and mixture of grays.

The second and third issue of, "Wulfborne," were both a real treat to read, with my earlier criticism of the plot seeming a bit too minimal/lacking fully addressed--and the fantastic artwork continuing to impress. Brian Middleton Jr. has crafted a stellar read and it is yet another example of the amazing books put out by publisher, SCOUT Comics, who clearly should be proud Middleton has his comic being published with them. I rate these two issues both 5 out of 5 stars, and would encourage you to ask your store to pull the upcoming third issue. You could also ask your store to order the previous issues, and if you lack a comic store, SCOUT has a helpful web-store with copies of the first issue and the second issue for sale). I look forward to seeing what Middleton does next, be it a sequel to, "Wulfborne," or something entirely that will doubtlessly be awesome as well.

Note: As mentioned in the article, digital copies were provided for the purposes of an honest review.
Posted by David Charles Bitterbaum at 2:57 PM