Brad Simpson is Out Here Coloring Like a Boss 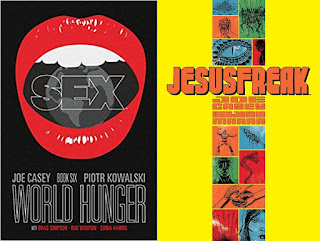 I recently read two trade paperbacks written by Joe Casey that were each quite good if very different tonally (interestingly enough, both are also from the great publisher Image). They also each had two different (and stellar) artists. One thing that took the comics over-the-top however is how they shared in colorist Brad Simpson doing his thing on them. I've said that colorists don't get enough recognition in the field of comics because often if a colorist is doing a good job you (the reader) don't notice. However, when a colorist does a stellar job, that makes an impact you take note of. Joe Casey works with an assortment of great artists, but he's wise to usually have Brad Simpson present for his color-work as it fits so many books so well.

The two trade paperbacks with Casey and Simpson involved are, "Sex, Volume 6: World Hunger," and, "Jesusfreak." "Sex," was a monthly comic that wasn't cancelled so much as put on a hiatus to then have it be attempted to release it in trade-paperback installments. Featuring the art of Piotr Kowlalski this is the first of those new straight-to-trade editions. "Sex," involves a man named Simon Cooke who made a pledge to quit being a superhero within his home of Saturn City and all the fallout that has resulted from that years later. "Jesusfreak," involves Joe Casey telling a 1970's exploitation-film styled tale of Jesus Christ and has the artwork of Benjamin Marra which fits the tone perfectly. Marra is not someone who usually collaborates with a writer, generally writing and drawing his own work, but he and Casey meld together well for this original graphic novel. Two very different tones tackled by a great writer and amazing colorist, and man does Simpson color like a boss. 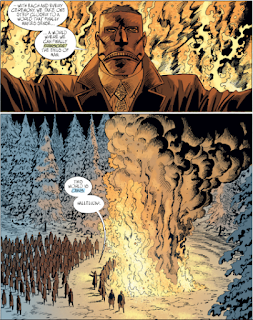 "Sex," and its sixth volume involves former masked hero Simon Cooke leaving Saturn City to explore a mysterious group with Illuminati-esque intentions. Meanwhile his former sidekick, Keenan Wade, and other associates try to keep their lives together as Saturn city is falling apart without Cooke's alter-ego, "The Iron Saint," present to help fight assorted super-villains there. Saturn City itself looks like a cross between Las Vegas and New York City with its towering buildings and neon-drenched streets. Simpson portrays it all with a wondrous and sickening glow, one which is expertly countered by when Simon ends-up in a cold and quiet resort in a foreign country where the colors shift to a much more muted tone except for the occasional brilliant burst of light from a fire or such.

With, "Jesusfreak," we get a psychedelic tint to the early Common Era that is excellent at furthering the surreal vibe of how the story takes place thousands of years ago but has a sensation as if it were a 1970's exploration film (as I earlier mentioned). Marra's artwork often has a stark and imposing form, and Simpson's colors mesh with it indelibly. Simpson is able to go from coloring the sleek and modern, "Sex," to the strange mish-mash of ancient times and modern vibes in, "Jesusfreak," with ease. He's just that good. 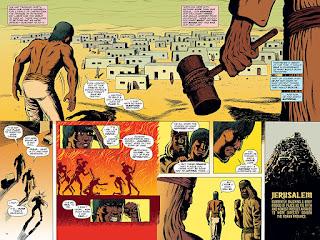 I love much of Brad Simpson's work and have been a fan of his for some time. He continues to do amazing stuff whether it is with a writer such as Joe Casey on these two books or the many other titles he colors. Between Casey's great writing, Simpson's incredible colors, and some damn fine artwork from Piotr Kowlalski and Benjamin Marra, I loved these books. Brad Simpson is one of my favorite colorists, and anytime I see he did his magical skills applied to a comic I know its time to get extra-excited to read it!
Posted by David Charles Bitterbaum at 1:49 PM