"Master," is Another Stellar Comic by Dale Forward 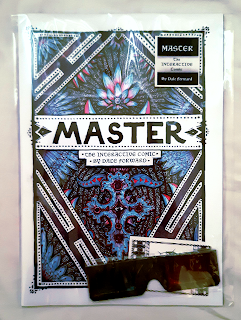 Back in February I reviewed the comic, "Warlock," by Dale Forward and enjoyed it a great deal. In that work Foreward utilized an included pair of 3-D glasses not to present the comic in 3-D, but to have it so that looking through the same page via the different lenses would result in different imagery appearing. I was extremely impressed with this clever element in Forward's art and was eager to review the book, "Master," when he told me it was completed and available for sale. Having now read, "Master," I am pleased to say it is yet another stellar comic by Mr. Forward.

"Master," uses the same storytelling element of the 3-D glasses, but instead of giving an in-story reason for it (within Warlock it involved enchanted eyes) it simply serves as a tool to allow the story to move ahead in clever ways. If, "Warlock," had the 3-D glasses and their as the star of the show then, "Master," is more designed to use them in the service of its story--both methods work great in the end, of course. Master takes place in a fantasy world quite like the one in, "Warlock," and they may even share the same universe (it is unclear) and follows a character known as the, "Master," who has tired of fighting countless foes and always winning. He wants to finally be defeated and die after years of conquering daemons, goblins, serpents and other monsters. 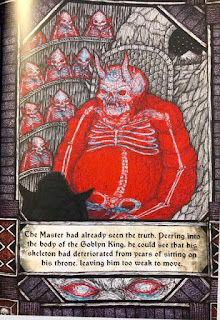 We witness as the Master eventually learns some deep philosophical truths about the World I won't fully spoil in case you read the book, and I was pleased to see the book go in this introspective direction as opposed to simply having the climax being the Master having some huge bloody fight (although he does have a few earlier in the story). Forward's artwork continues to be incredible, with the mixture of red, blue, and black resulting in the 3-D glasses making pages fascinating whether it is a cool trick where we peer through one lens and see a closed door only  to then check the other lens and witness it flung open, or the lenses being used in other clever ways such as the world swirling around the Master whilst he, drawn in black-and-white ink, remains immovable no matter what challenge comes his way.

"Master," by Dale Forward is another fantastic comic that illustrates how Forward is a stellar creator. I enthusiastically rate it 5 out of 5 stars. You can get yourself a copy of, "Master," via his Bigcartel store, and check his work out on his Facebook page, Instagram Page, or say hi on Twitter.
Posted by David Charles Bitterbaum at 10:24 AM