The New, "Hellboy," Movie Sounds Bad, but I'd See it for One Reason/Actor I Heard About 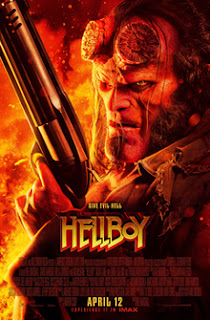 If you've been following the reviews of the latest, "Hellboy," movie I've seen thoughts ranging from that it isn't especially entertaining, to folk stating it is just plain bad. However, one thing stuck-out to me in reviews that mentioned a surprise cameo. Should you be wary of spoilers quit reading this post. Everyone still here as nobody really cares about spoilers for this crappy movie? Okay, good. Anyways, it seems that during a zany post-credits scene we see the arrival of fan-favorite character from the comics, Lobster Johnson AKA The Lobster, played by none other than an actor I quite like, Thomas Haden Church! Church has been in super-hero flicks before (he was the only good element of, "Spider-Man 3," compared to the rest of that train-wreck) and it seems his little stinger segment is designed to set-up a potential sequel to the, "Hellboy," movie coming out today.

Depending on if abysmal reviews sink the flick (and destroy the chances for another installment) or it succeeds despite criticism remains to be seen, but I now kind of want it to do well just so that we get more of Church as Lobster Johnson in a future movie. The idea of a Thomas Haden Church playing a wacky pulp-hero alongside David Harbour's valiant attempt at portraying Hellboy (that still apparently is pretty weak) almost makes me forgive how we'll never get a, "Hellboy 3," with Guillermo Del Toro directing and Ron Perlman effortlessly doing his version of the lovable big red demon. Almost, but not in actuality. I will never forgive whoever/whomever is to blame for the lack of a, "Hellboy 3."
Posted by David Charles Bitterbaum at 12:02 AM