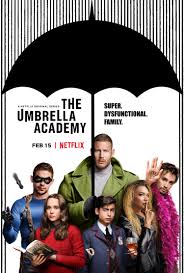 I've been fan of, "The Umbrella Academy," comics since reading the Free Comic Book Day issue published by Dark Horse way back in the bygone era of 2007. When I first heard about the comic I shrugged at the news some music celebrity named Gerard Way from, "My Chemical Romance," was writing it--after all, another famous person supposedly writing a comic sounded drab. Then I read that FCBD issue as well as the first mini-series and was absolutely floored by Way's creativity, masterful quirkiness, and superb characterization in addition to killer plotting. Plus, the artwork by Garbiel Bá  was the perfect compliment to all the wild insanity on display. The second mini-series, "Dallas," was spectacular as well and then...nothing. Gerard Way still made comics, but about other subjects, and Bá is always in demand as a talented illustrator. It felt like it took forever, but then in 2018 we both had the joy of a 3rd mini-series finally happening, and a show being announced for Netflix. My wife and I watched the whole first season of Netflix's adaptation of, "The Umbrella Academy," and we enjoyed it a lot!

One thing about this version of, "The Umbrella Academy," that is readily apparent is that while it draws heavily from the tone of the comic, it picks-and-chooses what other elements to use in regards to who the characters are, what plot to utilize, and is overall a lot more grounded--albeit still edgy and quirky. The show never has the team fight the Eiffel tower after it comes to life as in the comics (there is a little mention of such a thing, but yeah) instead focusing on them as grown-ups in a world that is off-kilter but still not too weird, maybe just weird enough. Others have remarked on how, "The Umbrella Academy," isn't super-strange, with SYFY observing it is a lot more mellow compared to, say, "Doom Patrol," on the DC Universe service (which I've still been meaning to try). That isn't to say the show being a little less wacky is bad, it just is something readers of the comic may notice. (it also draws from elements of both of the first two mini-series to some degree as opposed to being a general adaptation). The show is still damn good. 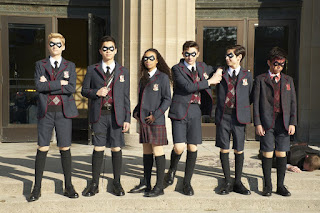 "The Umbrella Academy," focuses on an adoptive family of adults who used to be super-heroes as children under the care of a pretty-unpleasant adoptive Father, Reginald Hargreeves. They are all grown-up now (the ones who are still alive or not missing) and living their own lives. However, Hargreeves dies and it results in them coming together to see if he was actually murdered whilst also preventing an upcoming world-ending apocalypse they've been warned happens in about a week. So yeah, a lot going on over these 10 episodes. Speaking of the 10 episodes, I probably loved the first two and last two the most, with the scene-setting early on giving us some great moments and things getting really exciting and zany at the end of the show.

The middle-episodes don't necessarily drag, but it at times feels like we are getting a lot of filler, especially when in one episode (I'll be vague so as to not spoil too much) certain things that seem to happen are later revealed to be a big misdirect, making a good chunk of the viewer's time a bit squandered on a, "What-if?" scenario. The whole show is great, but the earlier parts and ending bits are probably the best, outside of a one batshit-wild use of the song, "Ride of Valkyries," in episode 5 that resulted in my wife and I laughing out loud. Perhaps I feel this way as much of the show is loaded with mysteries, and those mysteries are introduced early and not fully resolved until towards the end. That's okay though, because the cast is mostly stellar all-around, between such great talent as Ellen Page, Robert Sheehan, Emily Raver-Lampman, Aidian Gallagher, and Mary J. Blige is involved too as a time-traveling assassin! 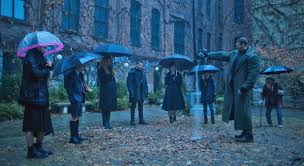 The first season of, "The Umbrella Academy," is fantastic and the show has already been renewed for a second season thanks to both its high quality and apparently being a hit (Netflix rarely shares exact numbers, so we just have to trust what it offhandedly says). Samii and I both enjoyed the show and she and I agreed we'd rate it as being 5 out of 5 stars. It is very different from the comic, but just as fantastic a piece of entertainment. I just hope Gerard Way and Gabriel Bá start putting-out comics about the characters a bit faster if for no other reason than it'll give the show more material to draw from and result in further excellent comics.
Posted by David Charles Bitterbaum at 8:26 PM