A New Publisher Named AWA/So That's What Bill Jemas Has Been Up To! 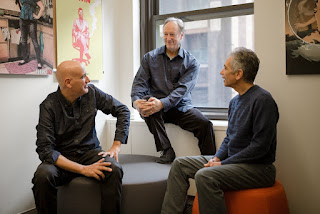 Back in October of 2018 I talked about how someone had given Bill Jemas a lot of money. Jemas of course has been in the realm of comics for decades, helping revitalize Marvel in the early 2000's when he was in charge with some great ideas (the Ultimate line) and some stinkers he wishes people would forget ("Marville," for sure). He also later on did the Double Take comics I at first hated, then liked, then found out were cancelled. Jemas has a number of people who love him as well as folk who absolutely hate him. In October of 2018 it was evident investors had given him a lot of money and rumors swirled of other comic-pros he maybe had scooped-up. He essentially said to everyone to check-back in 2019 and all went silent. Until now.

"The New York Times," just had an article this week talking about none other than Bill Jemas, plus his friend Axel Alonso (who either left or was forced out of Marvel a bit ago depending who you ask) and Jon Miller, a man most notable for brokering the deal Mark Millar made with Netflix to adapt his comic-properties into shows. These three are behind Artists, Writers, and Artisans, or AWA. Jemas and Alonso both have a lot of connections so they've got some big names working on the handful of comics they've announced they'll be putting-out (although Comicsbeat observed on many titles who the artist may be isn't noted yet). J. Michael Straczynski who wrote that stellar, "Supreme Power," comic and a lot of trash is returning to comics for the first time in 3 years to do an interconnected superhero universe, and there will be standalone titles too. Those will be coming too from Peter Milligan, Christa Faust, Michael Moreci, and Frank Cho (yes, he'll be doing his usual Cho-thing with a series about well-drawn sexy women who compete in athletic events to be Queen of the Galaxy, or such).
Drawing to some degree from the early Vertigo years (Alonso worked there before Marvel) and Image's structure and philosophy, creators will own a stake in their projects (how much of a stake is unclear as these aren't fully creator-owned), and there is a Creative Council (a bit like Image's board, I suppose) which has talent such as, "Screenwriter and director Reginald Hudlin, the novelists Margaret Stohl and Gregg Hurwitz...the comic book writer Garth Ennis," and Straczynski is on the council as well as he orchestrates whatever super-hero universe he has in mind. I wouldn't be surprised if some of those on the council have their own projects in the works for AWA as well.

Jon Miller's presence in all this makes it clear that AWA isn't setting out solely to create comics. I imagine the company's intention is to make these works as a proof-of-concept of assorted IPs that could then be turned into movies or television shows. After all, I don't think it is too cynical to assume that Jemas and friends were given a ton of money by investors for purposes besides simply making (hopefully good) comics. Jemas has overseen a lot of comic-book-related-endeavors. Some have been good, some bad, but always intriguing. Alonso has a great degree of experience as an editor and plenty of chums too, so between them and Miller clearly a lot is going to be happening in the near future with AWA. Whether this all turns out to be highly successful or is a colossal failure I of course am unable to predict, but with Jemas involved it's sure to be interesting. I look forward to when AWA's first comics come out and I am able to read them.
Posted by David Charles Bitterbaum at 5:36 PM