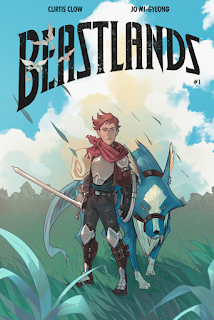 I was recently contacted by Curtis Clow of, "To Infinity Studios." They make comics and actually have one series coming-out soon that was picked-up by the publisher Scout Comics ("The Wild Cosmos,") for distribution to comic-shops. Clow reached-out to me because soon a Kickstarter will be launching for the latest comic, "Beastlands," which is written by Clow with art by Jo Mi-Gyeong. I was offered the chance to read the first issue of, "Beastlands," and quite enjoyed it. Mi-Gyeong's artwork is gorgeous and lush, giving us a beautiful fantasy land that looks mostly medieval in nature with a fantastical element in the form of big creatures known a, "Keepers," that many people have as companions. There is conflict however, as Keepers have been ordered to be killed by a King enraged that his Keeper could not save his own recently-deceased daughter. Between that and a group of adventurers trying to solve a mystery (whilst making sure their own Keeper is safe) a lot happens.

The mixture of a relatively-grounded world besides a few magic touches such as the Keepers, mixed with the delightful artwork results in this first issue of, "Beastlands," being a great read. The Kickstarter campaign for it launches on March 19th and you can sign-up to be reminded of the launch at this link (which upon the start of the campaign will redirect to the Kickstarter itself, I was told by Clow). You can also stay updated on, "Beastlands," by following Mr. Clow on Twitter or via the Instagram page of, "To Infinity Studios." I'd excitedly rate, "Beastlands," first issue with 5 out of 5 stars and wish the book lots of success with its Kickstarter campaign!

Note: A digital copy of, "Beastlands," was provided for the purposes of review.
Posted by David Charles Bitterbaum at 4:13 PM