The Return of, "The Ride," Sounds Promising

Something That Caught My Attention 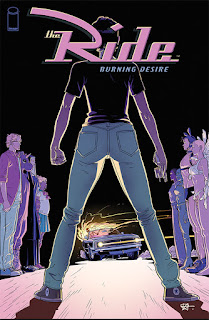 I don't generally do a cut-and-paste of when a comic company announces a new book as unless I have some unique insight to add what's the point? That said, the announcement of a new mini-series called, "The Ride: Burning Desire," to commemorate how the first mini relating to, "The Ride," came out 15 years ago as of 2019 was written just right to catch my attention. "The Ride," has always followed a wide range of characters with no connection to each other besides a unique car that somehow becomes involved in all kinds of stories that can range from gritty to wacky. Here is the announcement of the new mini-series below with some musings of my own after.

The Press Release Begins...
PORTLAND, OR 03/26/2019 — Image Comics is pleased to announce that The Ride will celebrate its 15th anniversary with an all-new, five-part story from the award-winning team of Plastic—Doug Wagner and Daniel Hillyard. This action-packed miniseries will launch from Image Comics in June and will feature special backup content from Adam Hughes.

“Fifteen years? Really? Well then, I guess I’d better turn up the heat on this one,” said Wagner. “Let’s see. How about…Unicorn onesies, love paddles, leather bunny ears, a guy in a Sailor Moon outfit that’s way too tight, an angel with only one arm and a heroin problem, a hairless dwarf, and a disavowed detective whose past desperately wants her burned alive—are all going to take a road trip in a classic ’68 Camaro that may or may not be cursed. The Ride 15th anniversary is going to be a wild, disturbing, and excessively violent tale of redemption. Welcome to what I like to call FETISH NOIR!”

After serving a hard 15 years in prison on a murder plea, former Atlanta P.D. detective Samantha Vega now makes her living as a bouncer at an exotic dance club. But life on the outside isn’t easy, especially when enemies have scores to settle…

Back to Me
I mean come on, people, doesn't that description of what to expect read as deliciously absurd? "Fetish Noir," has to be the best new term I've heard in a while to describe a story. I've enjoyed previous editions of, "The Ride," and quite liked, "Plastic," so I'm excited to see what, "The Ride: Burning Desire," holds for us readers when it starts in June!
Posted by David Charles Bitterbaum at 8:11 PM