I always have fun at the Toyman Show, but yesterday was simply sublime. I brought some stuff to trade/sell and acquired all kinds of awesome stuff whilst also chatting with some really cool creators. So much happened yesterday it took me until today to note it all down for this post. 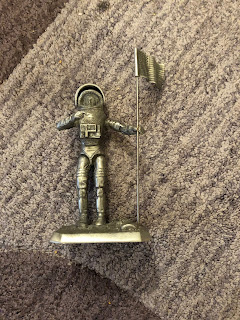 Probably the coolest thing I got at the show was this astronaut G.I. Joe. I was talking with a vendor about his Batman wares and he asked if I was a fan of G.I. Joe; I honestly told him I generally was not, but he said I might find one item he had really cool. He proceeded to take out of its box and show me the above metallic figure, designed to look like it was on the Moon, and it really spoke to me. Perhaps it was because of my fondness for my Grandfather who worked for NASA, but I had to have it. We cut a deal and the figure was mine.

I proceeded to walk about running into some other chums of mine who sell comics at the show, including Eric of STL Comics and Spike from Lost in Space Toys and Collectibles. Eric had a ton of cool $1 books this show and Spike had a gorgeous first issue of, "Ghost-Rider," which was CGC graded and quite snazzy. There were tons of other downstairs vendors as well with the usual wide-range of toys, comics, and fantastic antiques, I made to go upstairs too because as the show has grown more and more plenty of cool stuff is up there in addition to downstairs. 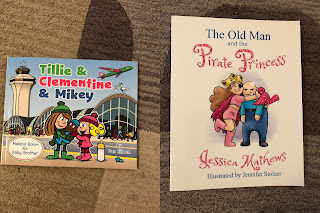 In the upstairs area there were more vendors, plus guests of the show Robert Mukes, Susanne Lamdin, and other cool folk. There were stellar authors, including friend of the blog Dan Killeen, from whom I bought the book on the left, "Tillie & Clementine & Mikey," which my wife and I are excited to read to Clarkson. I met Jessica Mathews from whom I bought the fun book, "The Old Man and Pirate Princess," which discusses not judging people based on how they looked--and contains a farting ninja (I had to have the book as soon as I heard about the farting ninja). The book's illustrator, Jennifer Stolzer was there too, and both Ms. Mathews and Ms. Stolzer were kind enough to sign the book.

I met author Dave Rudden who was selling his, "Age of Humanity," books that discuss a family dedicated to hunting the supernatural. Lastly, I had the pleasure of meeting J.E. Nelson who had a cool-sounding book titled, "The Power Within," about a middle-school student named Daphne who has autism and has to survive a zombie apocalypse. Ms. Nelson told me about how he own daughter had autism and she worked to make the book accurate about its portrayal of autism as opposed to how it is sometimes portrayed in unrealistic ways. 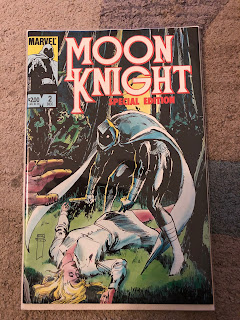 Downstairs I found an assortment of other random comics, but the most notable one I found this time was a cool old, "Moon Knight," issue I got from my good friend Phil Trapp of The Comic Grind, an amazing bus that has a comic-store inside (I've talked about it before, and it is really cool). It was a jam-packed day at the Toyman show and I as always have to thank Chris, "Toyman," McQuillen for having run such a spectacular show for so long that continues to be great every time I attend between the vendors, creators, and special guests. The next show is May 5th, at 12365 St. Charles Rock Road, Bridgeton, MO, 63044, as always, from 9AM-3PM, with 8AM early-bird entry if you can't wait to start checking-out all the goodies at the show. I hope to see any readers of the blog who are able to attend there!
Posted by David Charles Bitterbaum at 1:28 PM