"Rick and Morty vs. Dungeons and Dragons" #1 is Suitably Entertaining 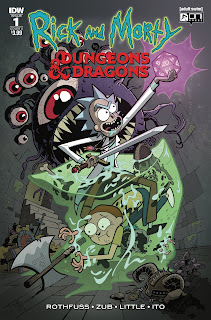 I'm a fan of the television show, "Rick and Morty," finding it quite humorous and clever. I get disgusted with the elements of the fan-base that idolize Rick and miss the point that he isn't someone to aspire to be, but a figure to scorn and sometimes pity. That said, I and other folk who like the show but aren't hateful morons always enjoy a good adventure featuring these two zany protagonists. There is a new comic featuring an official (AKA approved) cross-over of Rick and Morty with the Universe/game of, "Dungeons and Dragons," titled reasonably enough, "Rick and Morty vs. Dungeons and Dragons." It is suitably entertaining if not amazing. The basic idea is that Rick teaches Morty how to play, and due to these characters always making things extra-complicated and causing trouble things go off the rails quickly.

I was worried the fact this was a crossover that had to get commercial approval from Wizards of the Coast (they own the rights to D&D) it would as a result dilute the content/jokes, but thankfully that wasn't the case. There are plenty of jokes both affectionate towards and critical of, "Dungeons and Dragons," (Morty's declaration that the first edition, "Sucks," isn't argued with) and even if you aren't super well-versed in the game such as my mostly-ignorant self you'll still get the punch-lines. One thing I enjoyed was how excited Rick got at hearing Morty wanted to play the game (although Morty just wants to learn to possibly hook-up with a girl who runs a group). It just seemed weirdly fitting that Rick would be a big fan of, "Dungeons and Dragons," and love all the details and such that can go into playing it. 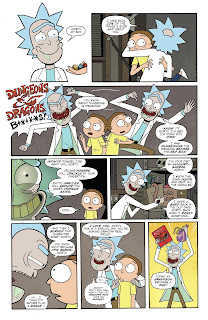 One issue I have with reading comic-book adventures of Rick and Morty is that I can't hear the characters talking. I can imagine it in my head, but there is something magical about the weird cadences in Rick and Morty's voices when they speak, alternatively stuttering, burping, yelling, etc. For that reason I only read the first two issues of the main comic when it started coming-out some years ago--and as an aside I sold that #1 issue for what I thought was a stellar price of $30, reasoning the show wouldn't get any bigger than it already was at the time. It of course became a cultural phenomenon and now that comic is worth a lot more cash. I still kick myself about that, but I digress. Even without being able to have Justin Roiland in the room doing the voices I've gotten a bit better at imagining the dialogue, so that's good, and the jokes come fast and furious even if they sometimes fall flat.

The first issue of "Rick and Morty vs. Dungeons and Dragons," has some decent humor, but didn't make me absolutely crack-up. It's a solid joint-venture between Oni Press (who publish, "Rick and Morty," comics) and IDW (who publish, "Dungeons and Dragons," comics) however and sets the groundwork for what I imagine will be other fun issues--I can't wait to hopefully witness Jerry attempting to play and failing miserably at the game, as he is wont to do. Overall I would rate this a good...3 out of 5 stars.
Posted by David Charles Bitterbaum at 9:23 AM