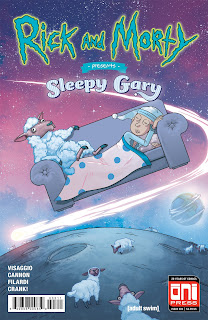 I am of course a big fan of the, "Rick and Morty," television show. I also have at times dabbled in comics published by Oni Press related to the characters. When I heard there would be quarterly-comics spotlighting particular secondary characters I was intrigued to hear about, "Sleepy Gary," for a number of reasons, one being he introduces an interesting element of sexual fluidity to Jerry on the show, and the other being he technically doesn't really exist. You see, we met and saw the end of Sleepy Gary in the season 2 episode, "Total Rickall," where a mind-altering parasite invades the house and has the ability to pose as various people then convince others through false memories it is a longtime friend, relative, or lover. In that episode the Smith household was able to defeat the parasite as it rapidly reproduced itself through more and more false memories, but not before some interesting concepts were introduced.

Viewers of the show know that Jerry is of course Beth's husband--usually (they separated at the start of season 3 but reconciled at its end). He is the Farther of their two children, Summer & Morty, and hates how Beth's father, Rick, lives with them and otherwise belittles him. However, in the episode, "Total Rickall," the alien parasite was able to make the house believe that, "Sleepy Gary," was Beth's husband and the father of the kids, with Jerry simply being a family friend. It also however made Jerry think that at one point he and Gary began a secret relationship. This is interesting, as the show has never really discussed Jerry being at all bisexual, and resulted in some fan discussions of if Jerry was in fact also attracted to men, "tricked," by the alien, or what the case was. Most folk seem to agree the alien parasite preys upon what people most desire, and Jerry desires someone, anyone, to pay him attention and give him affection, with that person's sex being secondary. In other words, Jerry is sexually fluid. 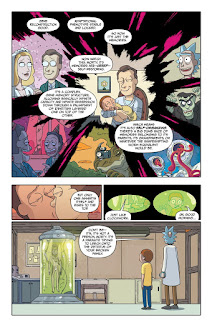 The parasite never, "tricks," anyone else into finding someone attractive they otherwise would not be sexually interested in, so it is therefore quite likely that Jerry is indeed bisexual, pansexual, or simply sexually fluid in general, willing to fall in love with any person who is willing to give him attention, regardless of what kind of genitals they may have. Jerry is just simply is open to love. It's both sweet and ultimately tragic because Jerry is of course a loser who very few people--male or female--would consider worth dating. Hence, in this comic when Rick is attempting to figure out better ways to combat the parasite, he creates a version of a past kind they encountered--Sleepy Gary--and upon its breaking-out it realizes one thing that was a constant for it, loving Jerry (whether truthfully, or simply to assist in propagating itself is left open to interpretation), and it proceeds to find Jerry and convince him of the same.

Much of, "Sleepy Gary #1," is then spent with Rick and Morty working to track down Sleepy Gary once he escapes and proceeds to abduct Jerry, flees to Mars, and creates an elaborate bunch of false memories for he and Jerry as a happy and loving couple of an adopted alien baby on Mars. It is all fake of course, with Jerry angrily exclaiming how he and Gary should be allowed to spend their years in peace before Rick points out its actually been all of, "27 hours," since Gary escaped and kidnapped Jerry to Mars with their paper-thin facade of a happy life. The saddest thing is that this version of the parasite/Gary truly seems like it is trying to create a happy life, no matter how much of sham, with the little bits of false memories that the parasite itself seems to believe--it truly thinks it loves Jerry and may very well not understand it is simply a reproduction of a malevolent parasite that previously used Jerry as an end to its means of taking over the Universe. Sleepy Gary is himself a fictional construct that its own parasite wants so desperately to be real it builds its own false life that is little more than a metaphorical house of cards barely two days-old. It is both as clever as it is sad and hilarious. 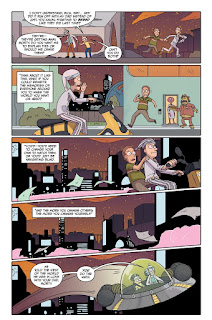 Eventually Rick manages to kills the parasite, Jerry realizes just how much was faked again as in the, "Total Rickall," television episode and is quite mad at the parasite for tricking him into thinking they had a special romance--because again, Jerry is a loser desperately seeking love and affirmation. It is a really great comic for how it handles these ideas of sexual fluidity, false memories, and of course is an absolute riot as all the better, "Rick and Morty," shows and comics manage to be. Magdalene Visaggio is a stellar writer (I've read some of her work with Black Mask and enjoyed it) and I appreciate the skill with which she juggled so many concepts and ideas. CJ Cannon makes everything, "Look," like, "Rick and Morty," superbly as well, so a fantastic issue all-around I eagerly rate...
5 out of 5 stars.
Posted by David Charles Bitterbaum at 9:31 AM