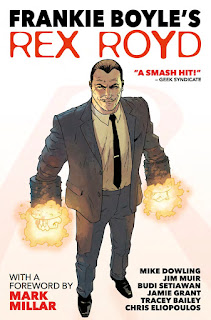 Back when I was wrapping up my senior year of college in 2010 and Mark Millar's work still had some promise and wasn't just empty pitches for movies and television shows, Millar created a comic-magazine titled, "CLiNT," which by the title alone with its cheeky usage of a lower-case letter, "i," so as to kinda-sorta look like the swear-word, "Cunt," tells you basically everything you ever need to know about Mark Millar's sense of humor. The magazine had an assortment of Millar's works as well as contributions from other creators, and one strip that caught my eye due to being just plain weird and interesting was, "Rex Royd." Written by controversial Scottish comedian Frankie Boyle (whose comedy work I'm unfamiliar with but from what I've read about him tends to be a mixture of political, raunchy, and offensive) and illustrated by then-newbie Mike Dowling, I found, "Rex Royd," strangely fascinating.

"Rex Royd," in a purposely-disjointed manner chronicled its titular super-villain as he fought against super-heroes, God, secret organizations, and basically was a bad-guy who inadvertently would sometimes do good, but still was quite a bastard. "CLiNT," collected it occasionally and the magazine ended-up cancelled due to dwindling readership and a failed re-launch before the strip could conclude. Thankfully though, the original publisher of, "CLiNT," Titan, has collected the previous chapters as well as two final ones illustrated by artist Budi Setiawan (whose style is a bit like Dowling but also enjoyable on its own). The full collection of, "Rex Royd," is quite the read, occasionally flirting with genius, but not quite reaching it. It is funny how in the introduction Boyle says he was inspired by Grant Morrison's amazing work, "The Filth," as this is probably the closet comic in comparison to that masterpiece when it comes to the odd way the story unfolds. Much as, "The Filth," has a wide array of ideas, tangents, and an otherworldly feel, "Rex Royd," does too. The thing is, "The Filth," eventually comes together with all its off-the-wall ideas and, "Rex Royd," is just far too messy to pull that off.
Boyle's idea with, "Rex Royd," is to make it seem like we are seeing bits and pieces of a sprawling epic, trying to make sense of the small excerpts we witness. It's a clever idea that works in its concept at first, but as more and more ideas are thrown-out and the book gets increasingly meta with Boyle himself appearing within the comic towards the end (more shades of Grant Morrison and what he did in, "Animal Man,"), it just gets confusing. You also really feel the style of Millar at times, with the book making some quite tasteless jokes--repeatedly--that it doesn't really need to do (clearly Boyle and Millar like to get tacky). Perhaps this comes from Boyle being a comedian known for his offensive humor, but repeated pointless jokes about HIV/AIDS  as well as, "spazzes/spastics (a relatively mild insult in America but a nasty slur for people with Cerebal Palsy among Europeans)," just kind of left a bad taste in my mouth at times.

The thing about it that makes some sense is that Rex Royd is in fact the bad guy, he would make these jokes. After all, he blows up a city with a nuclear bomb hoping to kill one person he believes is hiding there, he travels back in time and kills God because he wants to recruit the biblical Eve to work for him as an employee, and he enjoys murdering do-gooders--Royd is a terrible person who sometimes happens to do what's right, but he's still a monster. Boyle makes this clear, and it is the one thing that is clear, as the rest of the comic is a surreal mixture of concepts, jokes, and some really clever ideas that impressed me, but as I keep saying, fail to reach their full potential.
"The Filth," is one of my favorite stories ever--comic, prose, any form of literature. "Rex Royd," is by no means as amazing as, "The Filth," but clearly draws inspiration from it and achieves a lot of impressive moments even if the final product falls just short of genius. It still is a fascinating yarn to finally read in one complete form however, and even if Boyle shot for the moon and missed, he still landed amongst the stars, if I may use an old cliche saying. Putting aside when it is shocking-just-to-be-shocking or how at times it struggles under the sheer volume of ideas, it still is a damn fine read, and magnificently weird. It ain't perfect, but I'll still rate it a very complimentary...
4 out of 5 stars.
Posted by David Charles Bitterbaum at 12:12 AM