Heroes Never Die...but Their Contract Can End AKA Shake-Up with DC Movies 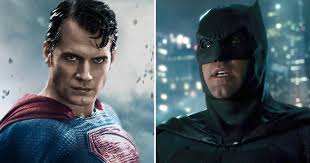 I'm going to start this post with a digression--and yes, I know starting any article or story in that fashion is a great way to lose readers, but I'm feeling frisky today so let's do this. Anyways, in the video-game, "Overwatch," there is a healer character named, "Mercy." I haven't played the game in forever and understand they changed it, but she used to have an, "Ultimate," ability that would resurrect all recently-deceased teammates within a certain radius. This was an incredibly useful power to have and could turn the tide of a losing battle. Upon using this power, the character would automatically often exclaim, "Heroes never die!"

The statement, "Heroes never die," has a lot of truth to it. After all, so many of our comic-book superheroes have died but come back, or even if their books are cancelled they live-on forever in our memories. The problem with putting super-heroes to film however is that the human actors who can portray them are flesh-and-blood and things can go horribly wrong. Heroes never die, but their contract can end, in other words.

Now we are at the main point of my article, third paragraph in, and if you're still here with me I thank you. Anyways, Henry Cavill is (most likely) done being Superman in the DC-related movies and Ben Affleck seems to be 100% done as Batman if a variety of reports that emerged yesterday are to be believed. The Cavill news seems more confirmed and the Affleck news has less solid proof, but considering how much trouble has plagued that, "The Batman," movie Affleck was supposed to direct and star in, then just star in, and now is possibly not in at all...I expect an official press release from DC/Warner Brothers, "Wishing him well with other endeavors," pretty soon. Yeah, I'd bet good money, "Justice League," was the last we'll see of those two guys as these heroes.

Weird Instagram videos from Cavill aside that raise more questions than answers, this all seems pretty clear-cut. DC and Warner Brothers need to basically reset or ignore this, "DC Cinematic Universe," and focus on either starting-over a lot of it while keeping the few elements that work (hey there, "Wonder Woman,") or just drop this whole, "Universe," idea and make individual movies about the characters that maybe kinda-sorta relate to each other but could also just be their own thing. Right now the only cinematic universes with any success are Marvel's and weirdly enough anything loosely related to, "The Conjuring," which I didn't even realize had a so-called universe till someone told me that new movie about an evil nun related to the other flicks with ghosts and murderous dolls--go figure, I guess?
Warner Brothers and DC don't need to save this extended universe, as some offered opinions about doing (although the idea of a Michael B. Jordan-portrayed Superman does get me all tingly). They just need to focus on making movies people actually want to see and which aren't plagued by tonal issues, poorly-hidden infighting among the production staff, or otherwise dull. In other words, just hire Patty Jenkins after she finishes, "Wonder Woman 1984," to at least have a hand-in all of your DC films as a producer or line-vision-organizer if you insist on having a cinematic universe of some sort. Right now everything seems to be in shambles besides some positive buzz for the upcoming, "Aquaman," flick and how, "Shazam," looks to at least be good fun. Anything after those and the newest Wonder Woman-starring film however seems to be one big question mark like the kind The Riddler is so fond of--and if Affleck is truly done as Batman we won't be seeing him solve that anytime soon...God, that was a weak way to end this article, I'm sorry. I start with a digression and end with a cheesy allusion to the comics, I really am lucky to have any readers.
Posted by David Charles Bitterbaum at 9:05 AM