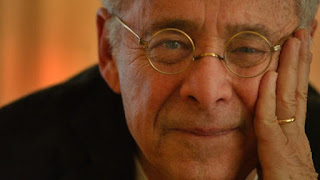 One of my favorite movies ever--if not the favorite, would be, "Confessions of a Dangerous Mind." Based on the autobiography of Chuck Barris it is a surreal mixture of actual documentary-style interviews, and lots of actors portraying fictional (or possibly real) events from the life of Chuck Barris. The directorial debut of George Clooney, it features Clooney, Sam Rockwell (as Barris), Drew Barrymore, Julia Roberts, and plenty of other talented folk.

In his autobiography Barris claimed that when he wasn't creating, "The Dating Game," hosting, "The Gong Show," or being involved in countless other programs he was secretly an assassin for the CIA during the Cold War. Was that true? An elaborate ruse by a famous showman? As the CIA isn't exactly forthcoming about all their work we may never know for sure (they denied it, but that's kind of a given). Still, it is an amazing movie and as someone who also enjoyed repeats and newer-versions of Barris' shows growing-up I was sad to hear he had died. Apparently he died of, "Natural causes," but I feel like he would have preferred his obituary say an old Soviet foe finally got him, or something equally dramatic and elaborate. Anyways, that news kind of hit me in the gut this morning.
Posted by David Charles Bitterbaum at 9:51 AM