Thinking Some More About Nostalgia

I've talked about nostalgia and its power multiple times on the blog, and it was on my mind again today. See, I was listening to the radio and they were talking about how sometimes a lot of the stuff we love only is good because of nostalgia. You know, things we remember fondly from when we were growing-up that in all honesty when revisited now kind of...well, suck. As this was a radio show they talked a lot about bands and music. This got me to thinking about music I loved growing-up that still holds-up amazingly well today. I'll fully admit Linkin Park or the Spice Girls are by no means Earth-shattering talents I thought they were back when I was a kid and teenager, but some things continue to be amazing.

For example, I discovered OutKast in the early 2000's thanks to their smash-hit, "Ms. Jackson," off their 4th album, "Stankonia." I sought-out their three previous albums and continued to listen to them, absolutely astounded by the genius that was their magnum-opus, "Speakerboxxx/The Love Below." They are the artist I've probably memorized the most songs of, with the 2nd and 3rd album basically ingrained in my mind as besides, "Speakerboxxx/The Love Below," those are my favorites. I don't even love the 4th album or their last official release, "Idlewild," a ton but even a so-so OutKast album is an amazing album in general. The best part about OutKast is that while I started listening to their stuff in my early teens it all still is amazing, and so much of it continues to sound incredibly ahead of its time. The one newer artist who maybe holds a candle to their genius is probably Kendrick Lamar, but besides him Big Boi and Andre 3000 are basically without peer. 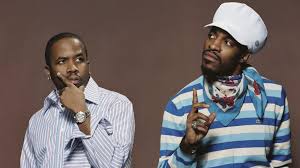 So, anyone else out there have a favorite thing that still is just as good today, even with the fog of nostalgia blown away?
Posted by David Charles Bitterbaum at 10:48 AM