What is #fourcomics?
A bit ago I talked about how "#comicsforward" was trending, and there is another Twitter idea that came about recently which I thought I would comment about/join-in on. It is "#fourcomics", and was created by comic-writer Jim Zub. It started out as discussing four comics that influenced you growing up, but has morphed into being four comics that matter to you in some fashion.

I posted my "#fourcomics" on Twitter at the start of the month and thought I would share why they are my four comics that matter to me. I suppose it all comes down to how they really impacted me in life either when I first read them, or sometime after. New X-Men #127
This could quite possibly be my favorite single-issue of a comic, ever. Yes, in all of time. I even remember how I picked this up, it touched me so deeply. It was from a local newsstand-store that back then sold some comics too, and it struck me with its weird image of a metal-headed man staring at a cheeseburger. I had been reading some of the "New X-Men" comics off and on but could not recall seeing this strange character, so I picked it up. It was amazing. I mean, all of Grant Morrison's run on this title was amazing, but this issue...just, wow.

The art was just the right kind of moody for its story of Xorn, the man with the metal head to contain the sun that served as his head, as he investigated a series of pets going missing around a part of New York City colloquially thought of as the mutant area of the metropolis. He writes in a journal we see excerpts of how he is trying to get a grasp of life here in America (he was a Chinese citizen locked in a prison due to fear of his power), and he stumbles upon a young teenage mutant in the process of changing, whose mother unfortunately has given him and herself an overdose of pills out of fear of how he will be treated when people learn of his changing and extreme hunger that led to eating local pets. Xorn tries to help, but it's all for naught. Life goes on though, as he remarks at the issue's end.

This all struck me as so deep and impacting when I first read it, and then of course later in Grant Morrison's run the dark truth came out that Xorn was Magneto in disguise all along. This should ruin the issue for me, but actually makes it even better. Xorn says things that hint at what Magneto would state--in the issue and others--and in a way this issue shows what a kinder, gentler Magneto would be like even though much of the journal entry he created could be fabricated.

This is just an amazing comic and one thing I hold up as a reason for why I read them. Moon Knight #13
This is from the run on the title that happened not too long ago, but due to various cancellations and relaunches of the title character's series now was...three ongoings ago if we count the current one? Whatever the case, it doesn't really matter, as not since Doug Moench's early Moon Knight stories had I enjoyed a run as amazing as Huston's on Moon Knight. I came across a hardcover of the first six issues from his run, loved it, and proceeded to follow the second arc to this amazing 13th issue, the last one Huston wrote alone before passing writing duties to Mike Benson, and God, what a way to finish. Coming out of Marvel's "Civil War" and its aftermath, this issue focused on how in a world where heroes have to register, a normal human who happens to fight crime like Marc Spector might be a tough case to judge.

A borderline psychotic character whose violent tendencies make Batman look like he uses kid-gloves on criminals, how would Spector possibly get government approval to be a hero? Well, this issue tackles that and it is glorious in its showcasing of how Spector's own instability could very well serve him in scaring enough folk to give him what he wants. This issue encapsulates why Moon Knight is arguably my favorite comic-book hero, namely, he is someone you don't always root for, but a character who is fascinating to witness the actions of. 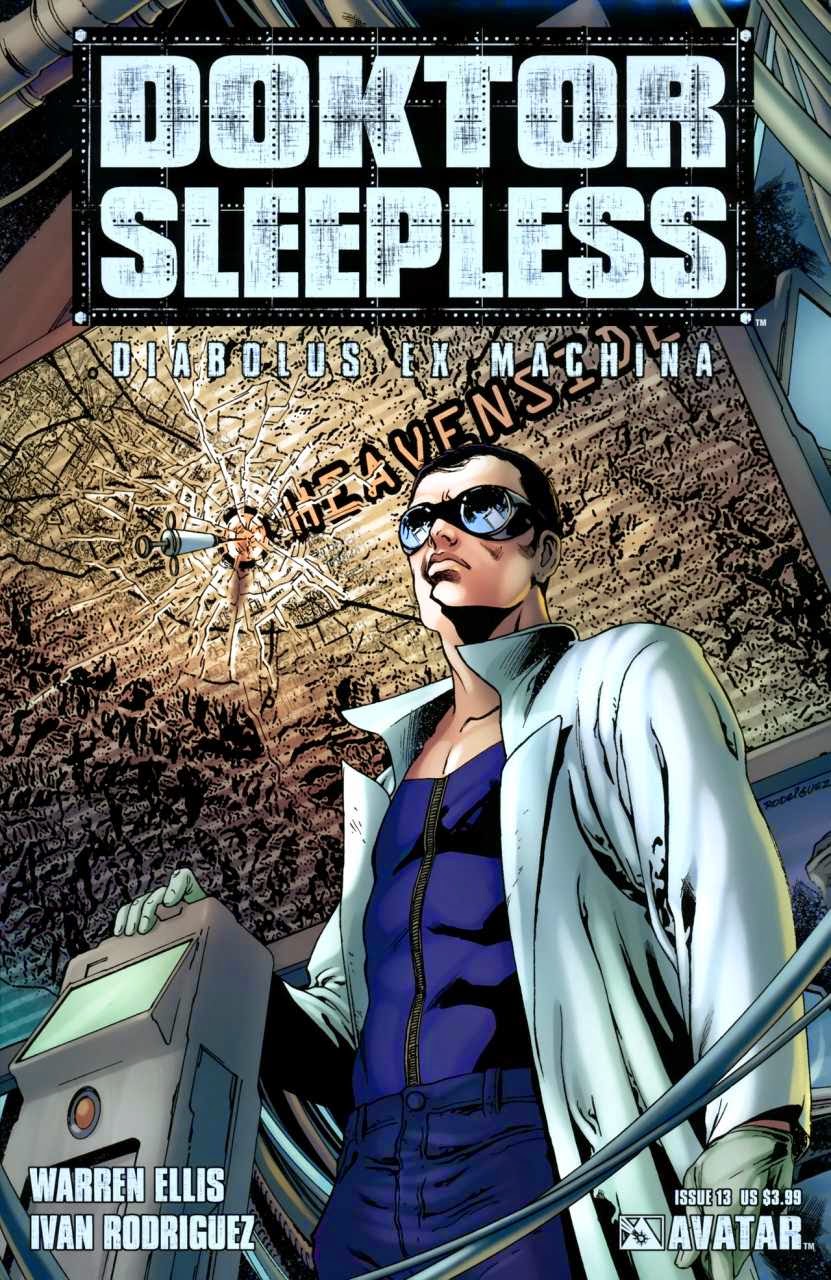 Doktor Sleepless #13
Arguably the comic that introduced me to Warren Ellis, in a sense. I say, "In a sense," as I had read things by Warren Ellis before, but not necessarily his "big-name" works that really showed-off his personality. Therefore, having been unexposed to the unique madness that is Ellis, opening up and reading something that was quite possibly the most "Ellis-y" comic ever was quite the shock to the my system--in a good way--over its amazing uncompleted run. Yes, that's right, another Warren Ellis comic that ended suddenly and may never be completed (there are a number), with this last, and marvelous, issue literally ending with a grenade flying through the air at a riot, now seeming to never be drawn exploding--just perpetually floating.

Full of radio-rants by the main character, Jon Reinhardt, that sound like mini-essays by Ellis, the comic concerns a future that has let people down. Graffiti covers the city with messages such as, "Where's my fucking jetpack?" and the populace finds themselves so disaffected with the world they've taken to physically modifying their own body with technology in an attempt to be able to feel again. Then the Lovecraftian monsters appear and its clear we are really dealing with something fascinatingly weird.

The fact that after the first arc our mad-scientist main character retreats into the background as various secondary characters attempt to make sense of the madness he has caused only makes things even more curious, with the mystery just possibly starting to be revealed a little bit more as it all suddenly ended on a cliff-hanger. I truly hope "Doktor Sleepless" comes back someday, but know it most likely won't. I treasure the issues I got though. 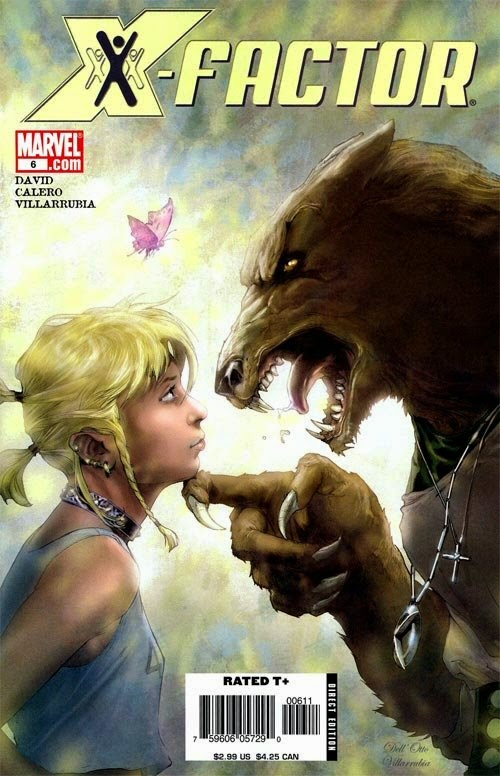 X-Factor #6
I've often discussed in the past just how influential "X-Factor" was in my life, with the series overall probably being my favorite run of a comic thanks to Peter David's amazing writing and great contributions from various artists. This issue itself may not be as incredible as some later ones in the series, but this was the start for me, i.e. the first one I read. I went back to enjoy the previous issues and "Madrox" mini-series that led into it, but this was the start of that magical journey.

"X-Factor" was a comic where every issue may not have been amazing, but enough were that you knew you had to follow the series. A big thing I appreciated was how Peter David didn't, "Write for trade," with his long-game being apparent in how he would have a character in one issue say they'd be back, and then 30-or-so issues later have it revealed they were behind a lot of events. Just that kind of thoughtful writing where you can see someone actually planned stuff out months and years in advance is something I like, especially in this era where it can feel like publishers don't have anything planned beyond an event or two.

Four Wonderful Comics of Many
It can be hard to pick just four comics, but these are prime examples of comics that make me proud to say, "Oh yeah, I'm a comic book fan." It is interesting and a bit sad three of them are older Marvel titles, with me reading less of that publisher lately, but so it goes. Anyhoo, what are your #fourcomics, my dear readers?
Posted by David Charles Bitterbaum at 3:08 PM